The purple plaque on the town hall honours Eirene White, one of the first three female MPs who represented Welsh constituencies. 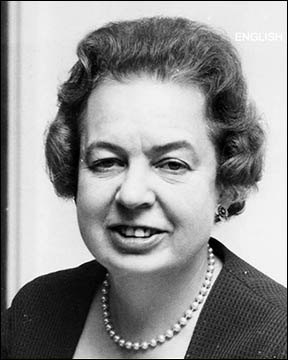 Eirene was born in Belfast in 1909 to Thomas and Eirene Jones. Rhymney-born Thomas was a senior civil servant in the administrations of four Prime Ministers, starting with David Lloyd George, and a founder of Coleg Harlech, which provided education for adults.

Eirene spent much of her childhood in Barry, Vale of Glamorgan. After graduating from Oxford University, she was a social worker, helping unemployed people in the great depression of the 1930s. She became one of Britain’s first female political correspondents, working for the Manchester Evening News and the BBC.

She married political reporter John Cameron White, after they met at a 10 Downing Street press event. The couple never had children.

Eirene entered the House of Commons in 1950 as Labour MP for Flintshire East. She lived in Shotton at that time. The lower photo shows her at the Commons on St David’s Day 1950.

She was Wales’ only female MP from 1951 to 1957 and again from 1966 to 1970, when she became a Peer and took the title Baroness White of Rhymney. Her energy didn’t diminish in the House of Lords. 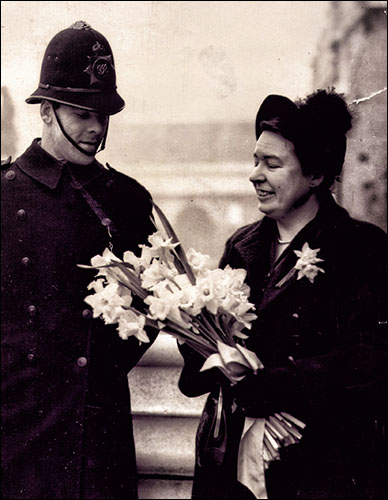 In the 1960s she held a string of government posts, including minister for foreign affairs and minister at the Welsh Office. She was also a governor of the British Film Institute, and later of the National Library of Wales. She chaired Coleg Harlech 1974-1984 and the University of Wales Institute of Science and Technology 1979-1989.

During her career she campaigned for better social equality and for reform of divorce procedures. Her strong anti-racist views were influenced by her experiences in 1930s New York when racial segregation applied there. Her book The Ladies of Gregynog tells the story of the Davies sisters, who founded the Gregynog Press and left the money to build Oriel Davies in Newtown.

Eirene died in Abergavenny in 1999. The purple plaque here was unveiled by her niece and nephew in 2022.