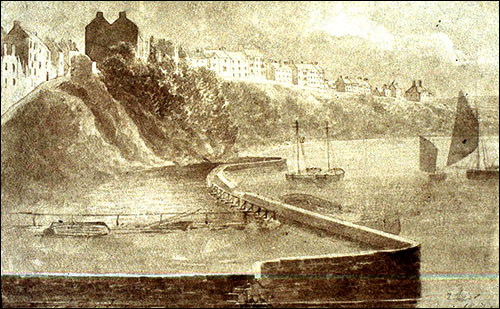 On the south side of Tenby harbour is what looks like an inner harbour. It was originally a sluice, where seawater was impounded at high tide and released eastwards at low tide. The outgoing water washed away sediment as it flowed across the harbour, ensuring the water there was deep enough at high tide for shipping.

The sluice was built in the early 17th century. Its walls were rebuilt at various times after then. The upper drawing, courtesy of Tenby Sailing Club, shows the full length of the sluice in 1817.

Shortly after then, a warehouse building (now the sailing club’s home) was erected over the eastern end of the sluice. Notice the three blocked arches below the building as you view it from the sluice. The arches were originally open, as you can see on our page about Sleeman's Stores, as the building was known. 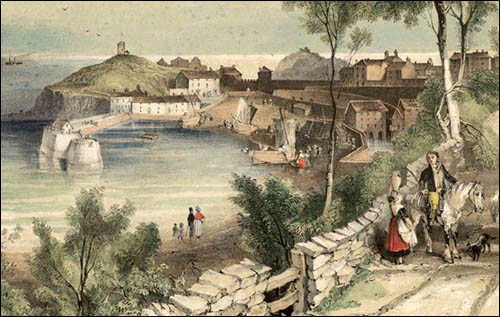 The lower two images are shown here courtesy of Llyfrgell Genedlaethol Cymru – the National Library of Wales. The upper one is from a larger painting, made before 1841. The sluice and warehouse are in the middle distance on the right.

In 1866 new harbour rules ordered that any ship needing ballast at Tenby must tie up beside the sluice wall to take on the sand or shingle. This material made the ship more stable at sea when sailing empty from Tenby.

The old sluice was used as a timber store before 1869, when the Tenby Corporation converted it into a dock where yachts and fishing smacks were overwintered. The sluice’s floor was levelled for the new role. The contractor created an opening in the wall six metres (20ft) wide and installed a new gate. 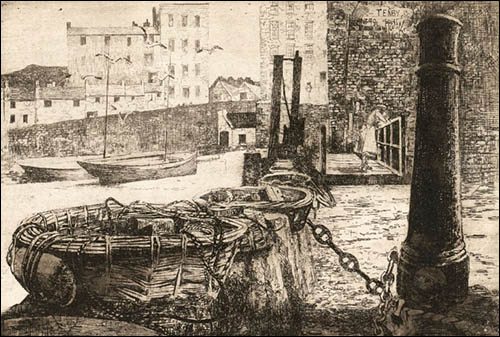 The sketch by William Monk shows the sluice wall in 1890, with a woman on the footbridge over the sluice gate, baskets on the parapet and a bollard made of an old cannon.

Almost 500 people gathered here in 1872 to watch the launching of the Kingfisher, a 14-ton cutter yacht built beside the sluice. It was the first Tenby-built vessel for c25 years and was launched into the sluice, where it received the finishing touches.

Saundersfoot harbour has a similar sluice, now covered over.

With thanks to Llyfrgell Genedlaethol Cymru – the National Library of Wales, and to Tenby Sailing Club