The station which occupied this site was no ordinary one. It was where the last horse-drawn goods wagons on the British Railways network brought slates for transfer to steam trains. It was known as Nantlle station despite being in Talysarn.

The old photo is shown here courtesy of Llyfrgell Genedlaethol Cymru – the National Library of Wales. It was taken c.1875 by John Thomas and shows the new station – opened in 1872. The station building (near the centre of the photo) is now part of the community centre, Canolfan Talysarn. 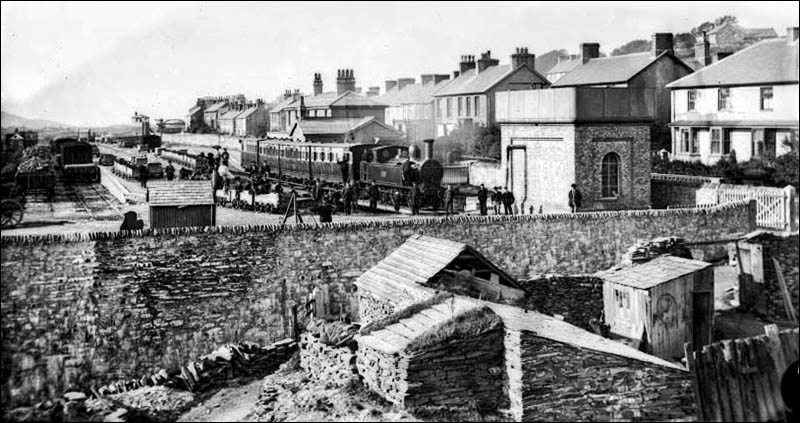 The route was originally the narrow-gauge Nantlle Railway, opened in 1828 from local quarries to the slate quay in Caernarfon. The rails were 107cm (3.5ft) apart.

The route north of Penygroes was converted to standard gauge in 1867 as part of the Caernarvonshire Railway’s new line between Caernarfon and Afonwen, near Porthmadog. The mighty London & North Western Railway soon took over. It converted the line from Penygroes to Talysarn to standard gauge.

To the left of the passenger train in the photo are rows of narrow-gauge slate wagons, on a broad platform known as a wharf. The slates were transferred to standard-gauge wagons in the sidings on the left. It was there that slate loader Henry Pierce Thomas, 22, was fatally injured in 1881 as he tried to step from a moving wagon, arriving at the wharf, to another wagon.

The narrow-gauge line left the station through the gateway on the far right in the photo. It threaded past several quarry pits to terminate near Nantlle village. Wagons returning to the quarries would occasionally carry coal or other goods from the wharf.

In front of the steam locomotive is a water tank on a brick tower, with a pipe for replenishing the loco. The passenger service was suspended in 1917 because of wartime shortages. It was withdrawn in the 1930s. Both railways here became part of the nationalised British Railways system in 1948 and closed in 1963. The narrow-gauge line remained horse-powered until a tractor was substituted, shortly before the closure.

The railway route from Caernarfon to Dinas was rebuilt in 1997 for the narrow-gauge Welsh Highland Railway.