Near the coast path at Porthlysgi stands a remarkable boulder – one of very few individual rocks to be named on Ordnance Survey maps! If you’ve just scanned the QR codes near Porthlysgi Bay, the boulder is c.110 metres to the south east.

The boulder is a glacial erratic. This means it has a different composition from the rock it rests on, having been transported from another location by the movement of ice. The position of erratics helps scientists to understand how glaciers moved in the last Ice Age. This boulder appears to have come all the way from Northwest Wales – see the footnotes. 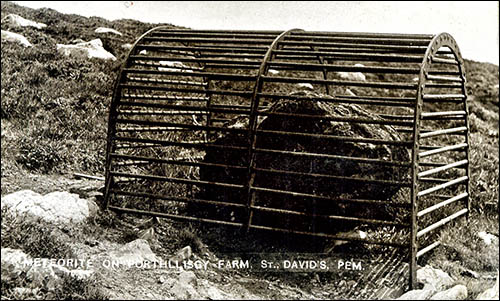 In 1891 the boulder was identified as being of picrite – the mineral olivine with small quantities of hornblende, augite, mica and felspar. The word ‘picrite’ has been printed on OS maps since the second edition in 1906.

In 1902 the Pembrokeshire Society for the Protection of Ancient Monuments, with finance from the Ecclesiastical Commission, erected an iron cage over the boulder to protect it from damage. Too many amateur geologists were hammering off pieces to take home! The postcard image from around that time incorrectly describes the boulder as a meteorite. Some meteorites have similar composition to picrite.

The boulder and cage were eventually pushed over the cliffs, but a helicopter was later used to move the boulder to its current location.

Porthlysgi or Porthllisgy farm takes its name from the cove Porth Lysgi, meaning ‘harbour or bay of Lisci’. Lisci or Lisgi is thought to be a personal name and has been identified with Lisci son of Paucaut or Paucairt in the Life of St David, dated c1200.

According to legend, Lisci killed the evil Boia, an oppressor of St David/Dewi Sant. Lisci is recorded as a Pictish name but in this case is far more likely to be Irish like Boia, whose name is preserved in Clegyr Boia (‘rock of Boia’), north of Porthlysgi. Place-names, personal names and other sources provide ample evidence of Irish settlement in west Wales in the early Middle Ages.

Footnotes: Where the boulder came from

Long ago this area was probably scattered with many boulders, mostly of local origin, deposited by glaciers. Almost all have been cleared from the land and incorporated into walls around fields.

Although there are outcrops of picrite in Pembrokeshire, the mineral composition of this boulder was found to be unlike local picrite but very similar to that which occurs on the Llŷn Peninsula and Anglesey, which is thought to be its most likely source.

This poses the problem that if glacial ice was channelled unimpeded over Anglesey and Llŷn and down the Irish Sea into St George’s Channel, it may either have skirted past this area or completely passed it by, making North Wales a less likely source.

However, in this area scratches (known as glacial striations) made on the bedrock by rock fragments at the base of the glacier have been found to run northwest to southeast. Some glaciologists therefore conjecture that the ice in St George’s Channel was squeezed between two large ice caps, one on Southeast Ireland and one in Cardigan Bay. After passing this constriction the glacier was then free to fan out to the southwest and southeast in what is described as a piedmont. If that was the case, ice from Anglesey or Llŷn is more likely to have passed over this area.