Here you can see a remarkable survivor from the early decades of the Industrial Revolution. The wood and iron device pumped water up to the Glamorganshire Canal, which ran parallel to Tŷ Mawr Road here. 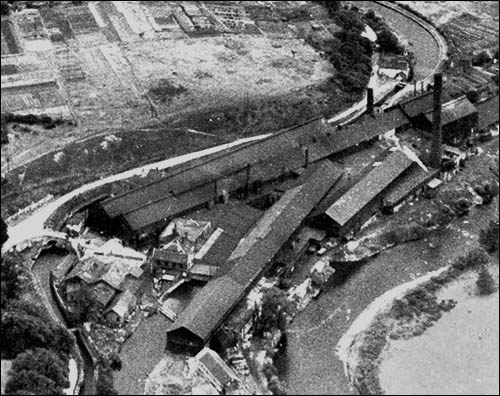 The canal from Merthyr Tydfil to Cardiff opened in 1794, making it faster and cheaper to transport bulk goods. Canals constantly lost water, especially through filling and emptying locks (where boats were raised or lowered). There was a lock on the canal here, a little north of the pump. You can see the former lock-keeper’s cottage across the road from the pump. 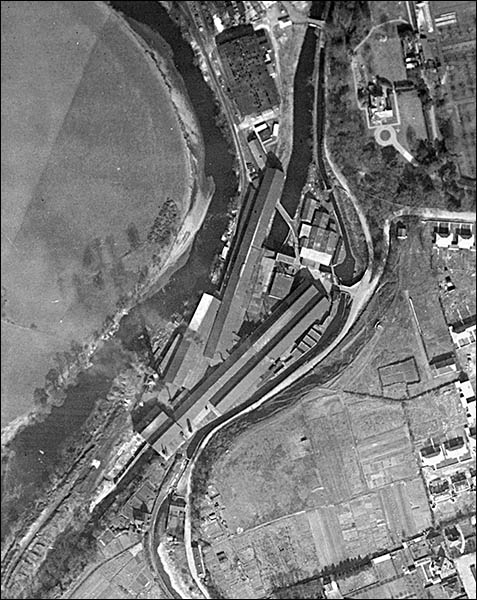 The solution was to pump water up to the canal from the channel where the used water left the factory. That was the job of this water-powered pump. It could be the original pump installed in the 1790s but is probably an improved version from c1807.

It operated constantly for well over a century, until 1927. The canal remained open but little-used until 1942, so the pump may have been used occasionally until then.

The aerial photos, courtesy of the Welsh Government, show the canal skirting the eastern edge of the tinplate works and the much wider feeder channel into the works. In the upper photo, taken in 1942, the pump and lock are near the top right corner. They’re near the lower left corner of the 1948 photo.

The pump was restored from 1974 to 1985 by volunteers from Risca Museum, where some of the original components are displayed. Another refurbishment culminated in 2011 with the wheel being able to turn again, albeit using an electric motor.

The canal and feeder channel were adjacent north of the works until they diverged just north of where the Ffordd Morgannwg houses are now. From c1815 there was also a tramway (early form of railway) into the works, carrying iron from Pentyrch. Forest Farm Road follows its course.