The area around the 1991 bandstand provides a good view of St Catherine’s Island, which can be reached on foot at low tide (follow the link below for visitor information). The original bandstand here was built in 1897. 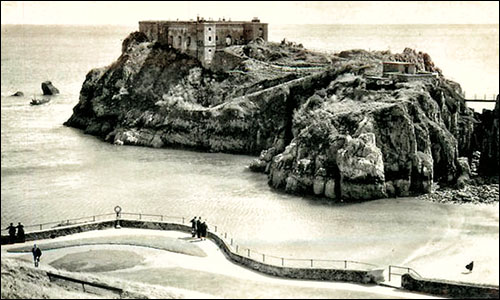 According to a poem written in the 9th century, there was a llys on the island – a nobleman’s court. A chapel, dedicated to St Catherine, stood on the island by the 16th century. It was demolished in the 1860s to make way for the fort. Roman coins were found beneath the chapel and medieval silver coins in the walls.

The War Department bought the island in 1866 from the Tenby Corporation, which had to arrange removal of the sheep which grazed there. The fort was completed in late 1870. It was intended to prevent a French invasion force landing on the beach and marching to the naval shipyards at Pembroke Dock. It was linked to the mainland by a suspension bridge, which was damaged when a smack delivering limestone to the construction site was wrecked at Castle Point during a gale in 1868.

The War Office sold the island to Evan Jones of Llanelli in 1907. He put in a £500 bid and was surprised this was accepted, because building the fort had cost about 100 times that amount!

He made a quick profit, selling the island for £2,000 in 1914 to coal and steel magnate Windsor Richards of Caerleon, Newport, who converted the fort to a summer home.

Anti-aircraft defences were installed in the Second World War, when the authorities feared the Nazis would attempt to invade Britain by landing on Welsh beaches. There was a zoo on the island in the 1970s.