The Cobourg Hotel, across the street, had its stables here. Today shops and craft studios occupy the site, now named after former owner Brychan Rees. His sons won the Grand National in consecutive years (see below). Many stable features remain, including stalls and mangers in the shops and the cobbled yard and two-part doors. 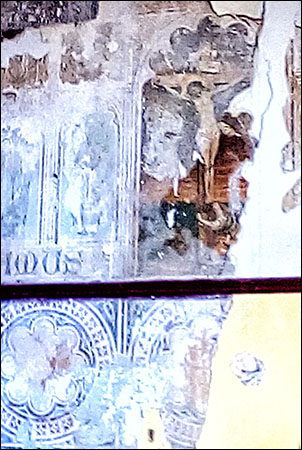 In 1888 a room above the stables became a Roman Catholic chapel. Catholic services in Tenby had previously been provided in summer only, at temporary venues such as vacant houses or public halls. After the chapel’s opening service, Maria Bowers of the Royal Lion Hotel provided luncheon for the guests, including the Bishop of Newport and Menevia. Parts of the chapel’s frescoes survive (see photo).

Maria bought the Cobourg stables for £600 in 1893, a year before her death. The property remains in the family. Tenby’s purpose-built Catholic church also opened in 1893. The former chapel here was used for cookery lessons organised by the county council.

The Cobourg Hotel existed by the early 1820s. After the railway arrived in Tenby in the 1860s, the hotel’s horse-drawn “omnibus” met each passenger train at the station in the holiday season. Guests could hire broughams and flys (light carriages) and post horses, or keep their own horses in the hotel’s “livery stables”.

Other horses also lodged here. In 1877 magistrates visited to see an old horse which had been worked by James Thomas “in an unfit state” and was too infirm to walk to the court. They fined James and ordered the horse’s destruction.

In 1893 a groom named John Wheelan brought the mare of his officer, Captain Cass of the Connaught Rangers, to the Cobourg stables and obtained a loan of 35 shillings, using the horse as security. He later abandoned her in Kilgetty, and was sent to prison with hard labour.