Swan Square was a busy commercial area of old Haverfordwest. One of the principal buildings here was the Swan Hotel, which possibly dated from the 16th century and was demolished in 1970. 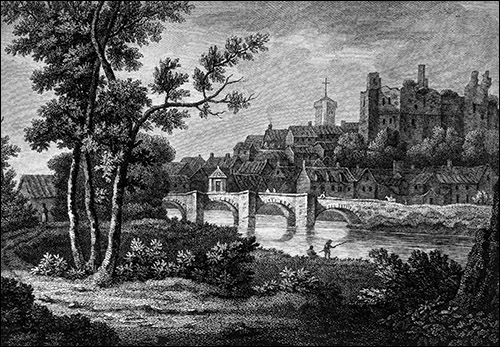 In December 1908 Swan Square was said to have resembled a lake after a culvert in Westgate was overwhelmed by heavy rainwater. The town was crowded because the flood coincided with fair day and the pre-Christmas fat stock sale. The water was eventually diverted into the river by planks placed across the square.

There was an important thoroughfare here, crossing the town via the old river bridge. The bridge still stands a short distance to the east but is now for pedestrians only. The bridge was built in 1726, to replace an earlier bridge damaged by floodwater. The earliest written record of a bridge in Haverfordwest dates from 1378.

The engraving of the bridge was included in an 1804 edition of Gerald of Wales’ 1188 itinerary by Richard Colt Hoare. It is from an original in the St Davids Cathedral Library, reproduced with permission of the Dean and Chapter of St Davids Cathedral.

It’s thought that Henry Tudor crossed the Western Cleddau river here in August 1485 on his march to the Battle of Bosworth, where victory resulted in his coronation as King Henry VII. He and his small army had landed on 7 August at Mill Bay, near Dale, after living in exile in France. Haverfordwest was the first town they reached. Their morale was boosted by the support they received here from locals who risked severe punishment for helping insurgents.

Henry reputedly received news at Haverfordwest that his quest to overthrow King Richard III would be backed by the men of Pembroke, Henry’s birthplace. His uncle Jasper, who had raised Henry in France, was still nominally Earl of Pembroke.