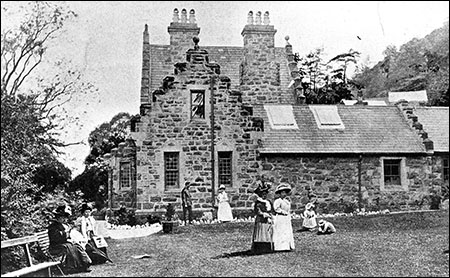 Water which flows from two springs on the hillside behind the buildings here has an unusually high concentration of iron. The buildings and springs are not open to the public – please do not enter the site.

The natural iron content of the water was appreciated by the Romans when they had an auxiliary fort and various mines nearby. The water emerges from the springs inside a cave which may have been excavated by the Romans, possibly to explore the possibility of mining here.

Local residents stopped using the water in the early 18th century, when a landslip blocked the cave entrance. It was reopened in 1733. With the development of tourism in the 19th century, facilities were provided to cater for the growing numbers of people who wanted to bathe in the chalybeate spring waters, believing this to be good for their health. 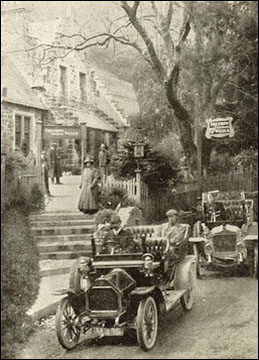 The prominent building with stepped gables which you see today was built in the 1870s to house a pumproom and bathroom. The pre-First World War pictures show the building along with visitors in the fashions and motor cars of the day.

Patients who visited, often on their doctor’s advice, paid a penny per dose of the iron-rich water in a room which resembled “the taproom of a working-class pub, from the high counter down to the sawdust on the floor”. In 1875, the owners began bottling the water for sale in several continents. This continued until 1959, when free National Health Service prescriptions in Britain altered the company’s main market.

The spa reopened in 1972 as a tourist attraction to capitalise on a renewed interest in natural health products. Since 2003, the spa has been owned by Nelsons, which sells the water under the Spatone brand across the world.

The water has been studied by many academics and government health officers. In 2003, for example, academics in Belfast published results of trials with pregnant women which concluded that Spatone helped to prevent iron deficiency because it did not cause digestive side-effects, which deterred some women from continuing to taking traditional iron supplements.