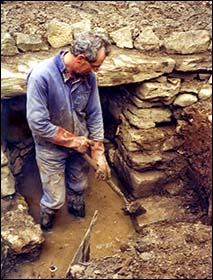 The holy well near Llanrhos church was lost for many years until 1993, when flash floods caused widespread damage in the area. The well was rediscovered when the area around it was cleared of debris. Subsequent exploration by local resident Ken Davies uncovered pieces of glass and several Victorian bottles and jars. The photo shows Ken clearing the well area in 1994.

The well (Ffynnon Santes Fair) is dedicated to St Mary, probably the original dedicatee of what is now known as St Hilary’s Church. The well doesn’t appear on a map dated 1889 but is shown on maps from 1900 onwards, when it was still the principal water supply for the area. It became obsolete when properties were connected to the water mains in 1908.

The footpath which passes the well has probably been a route for many centuries from St Hilary’s Church to the Vardre, a hill with two summits to the west. Nearby are Crogfryn Woods and Crogfryn Lane. Crog translates as gallows, and some people have imagined that hangings once took place in this vicinity. However, crog also means “hanging” in the sense of “crucifixion” and “cross”. Bryn = hill, and Crogfryn can be translated as the “high cross”. Medieval stone crucifixes were sometimes placed outside churches as a status symbol or as waymarkers for pilgrims. They were often built on or over ancient stone markers.

With thanks to Kevin Slattery and Ifor Williams, of the Deganwy History Group