Dewi Sant, or St David, founded a monastery here in the sixth century. He is Wales’ patron saint, celebrated on 1 March. He evangelised across a wide area, from Mid Wales to Brittany, and is credited with many miracles. In the 12th century the Pope recognised St Davids as a place of pilgrimage.

The monastery here, known as Menevia, was attacked many times. In 1089 thieves stole precious metals from St David’s shrine. 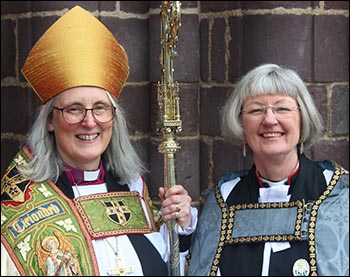 The present cathedral building mostly dates from the 13th century. The tower collapsed in 1220. The damaged areas were rebuilt by 1250, but other repairs were needed after an earthquake in 1248. With various later additions, the building is Wales’ biggest church.

Look up at the ornate ceilings when you visit. The carved oak ceiling over the nave dates from the 15th century. Looking along the nave’s length, you may notice a distinct lean, caused by wet foundations.

A high wall enclosed the medieval cathedral city. One of the gatehouses, Porth y Twr, still stands, at the top of the long sloping path.

The cathedral has a long tradition of scholarship. King Alfred (ninth century) asked the Bishop of St Davids for help to restore intellectual vigour to communities in Wessex which had been pillaged by Vikings. Rhigyfarch, son of a later bishop, wrote the seminal biography of St David c.1180.

In the cathedral lies an effigy reputedly of Gerald of Wales (Giraldus Cambrensis), who is said to have been buried at the cathedral in 1223. His campaign for independence from Canterbury foreshadowed, by seven centuries, the founding of the disestablished Church in Wales in 1920. For more about him, see our page about the effigy.

Gerald accompanied Baldwin, Archbishop of Canterbury, on a tour of Wales in 1188 to recruit for the third crusade. While pausing in St Davids, they were given accommodation by bishop Peter, who had accompanied them from the start of the tour. Gerald’s journal of the tour says St Davids remained the capital of Wales. Baldwin celebrated mass at the cathedral’s high altar.

In the presbytery you can see the altar tomb of Edmund Tudor, father of King Henry VII. He died, aged 25, in 1456, shortly after being imprisoned illegally in Carmarthen Castle by Yorkist agitators. Edmund’s remains were moved here from Carmarthen at the dissolution of the monasteries. His altar tomb was funded by his grandson, Henry VIII.

In the 16th century there was a plan to replace the cathedral with a cathedral in Carmarthen. The bishop’s residence was moved to Carmarthen in readiness, and the Bishop’s Palace near St Davids Cathedral fell into ruin.

The cathedral organ was built by the renowned Henry Willis in 1883 and rebuilt twice in the 20th century. The cathedral bells were removed from the tower to Porth y Twr in 1730 to avoid another tower collapse. Two new bells were donated by the American Friends of St Davids Cathedral in 2001.