This bridge originally had tubular spans. Opened in 1850, it was designed for the Chester & Holyhead Railway by Robert Stephenson, with help from others including William Fairbairn. Two parallel iron tubes crossed the Menai Strait, each being large enough to accommodate a train inside. 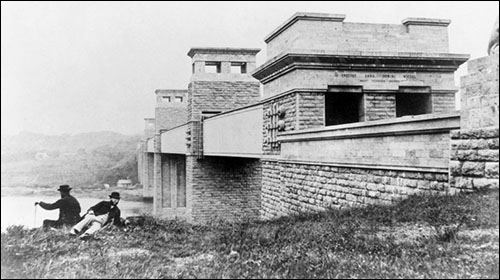 Britannia Bridge from the mainland shore c.1860s,
courtesy of the RCAHMW and its Coflein website

The upper photo, courtesy of the Royal Commission on the Ancient & Historical Monuments of Wales, is an early view from the Bangor end, probably in the 1860s. It is from the Central Office of Information Collection of the National Monuments Record of Wales.

Children trespassing in one of the tubes to look for bats and birds in May 1970 set light to tarred hessian inside the structure. The resulting blaze left the tubes distorted beyond repair. The photo of the fire, courtesy of John Lawson-Reay, was taken from the mainland shore.

The Britannia Bridge was rebuilt over the following years. Husband & Co. of Darlington designed steel arches to support the railway line. The design allowed for a road deck to be added above the railway. This now carries the A55 Expressway, the main road between Anglesey and Gwynedd. Additional concrete supports were installed beneath the shorter spans at both ends of the bridge. 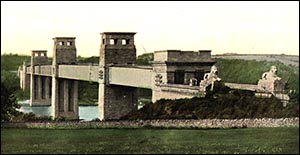 A short section from one of Stephenson's tubes has been preserved on the Gwynedd shore. Trains continue to pass through similar tubes at Stephenson’s Conwy bridge, which required only one span for each track compared with four at the Britannia Bridge. Joined together, those four tubes were 465 metres long. The middle photo of the bridge was taken by John Lawson-Reay in the 1960s and shows two of the four decorative stone lions.

Construction proceeded on both bridges at the same time. The Britannia Bridge had to leave enough space (more than 30 metres above the water) for sailing ships to travel along the Menai Strait. Jacking up the giant prefabricated tubes to such a height was a technical challenge. Stephenson insisted on raising them “inch by inch” with packing frequently inserted underneath. This precaution averted disaster during the first tube’s raising, when a jack 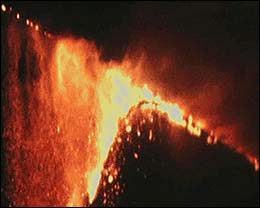 failed and machinery weighing 50 tons fell onto the tube, killing one worker. The packing prevented the tube itself from falling more than a few centimetres.

On the Anglesey shore, there’s a memorial to people who died during the bridge’s construction.

The most prominent features of Stephenson’s structure today are the three central towers, topped with portals in an Egyptian style. These were modified to enable the road deck to pass through. The road deck was constructed from 1977 to 1980.

You can view artefacts from the original bridge, along with documents and films, at the Thomas Telford Centre in the former National School in Menai Bridge.

Copies of the c.1860s photo and other images are available from the RCAHMW. Contact: nmr.wales@rcahmw.gov.uk