This building was once the district office of the Midland Railway. It is now home to Swansea Labour Club.

Wales was far from the core territory of the Midland Railway, based in Derby, but in the 1870s there were profits to be made from serving the thriving industries of South Wales, including Swansea’s copper factories. Rival companies had taken the easiest routes between England and Swansea, forcing the Midland to lease other companies’ tracks or negotiate rights to run trains over them. Its route passed through Brecon and Sennybridge before descending along the Swansea Valley to St Thomas station, on the east bank of the Tawe. 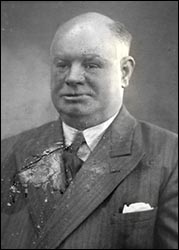 The company’s district “traffic centre” was at Brecon until 1906, when the clerical staff joined their colleagues at the district goods office, 44 Wind Street. In 1910, they all moved to “more commodious premises” at 27 Wind Street.

For several decades before the Midland Railway moved in, this building was home to a chemist’s shop which doubled up as an optician’s. In 1888 the chemist, J Atkins, sold a “blood purifier” which was claimed to banish the pollutants responsible for cancer, gout, distemper, scrofula and many other ailments. It cost 2s 6d per bottle.

Swansea Labour Club was founded before the Second World War as a place for working men to socialise. The photo shows WJ Herbert, the club’s first president. He was a founding member, from 1932 to 1952.