This whimsical village on a slope leading down to the Deudraeth estuary was conceived in the 1920s by the architect Clough Williams-Ellis (1883-1978). 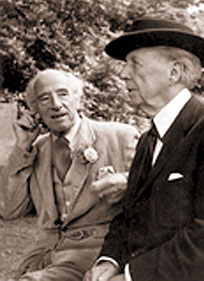 He's on the left in the photo, chatting in 1956 with American architect Frank Lloyd-Wright, whose mother grew up near Aberystwyth.

The oldest building on the site is Castell Deudraeth, built by the local MP in the early Victorian period. The original castle of that name dated from the 12th century. Deudraeth means “two beaches”.
To hear how to pronounce Castell Deudraeth, press play:
Or, download mp3 (22KB)

By the 17th century name Aber Iau was in use for the castle and nearby cottages, boatyard and foundry. In 1812 a maid was murdered here. A local miner, known as “Yr Hwntw Mawr” (the big South Walian), was hanged in Dolgellau for her murder.

Clough Williams-Ellis chose the name Portmeirion when he bought the land in 1925. Port refers to the coastal location, Meirion to the local area (Meirionnydd).
To hear how to pronounce Portmeirion, press play:
Or, download mp3 (16KB)

He lived at Plas Brondanw, east of Porthmadog. Construction of the village, already planned in detail, began in 1925. Many of the buildings, typically in the Arts and Crafts fashion of the day, were in place when war began in 1939. When work resumed in 1954, the architect favoured older, classical styles. He rescued several buildings which were on the verge of demolition and erected them at Portmeirion. The toll gate, added in 1976, was the last building he erected at Portmeirion. 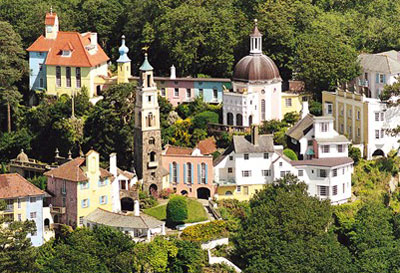 Portmeirion’s gardens and the woodland beside the village feature historic trees. The earliest, planted in the 1850s, include coast redwood, Douglas fir, and Deodar cedar. Victorian plants in what’s now the village include a variegated sycamore, a weeping silver lime and a tulip tree (or yellow poplar).

In the 1960s local residents played minor roles in the television series The Prisoner, starring Patrick McGoohan and first screened in 1967. Portmeirion provided a ready-made filmset for this tale of an individual, identified only by his number, rebelling against his separation from normal life. Enthusiasts of The Prisoner hold an annual convention at Portmeirion.

Portmeirion is one of the most popular visitor attractions in North Wales and features a restaurant, hotels and self-catering holiday accommodation. Nearby is Minffordd station, on both the Cambrian Coast railway and the Ffestiniog steam railway.

You can read about another building by Clough Williams-Ellis, in Criccieth, here.