This pub is thought to date from the mid-19th century. The original two-storey building at the front was later extended. Its name reflects its position at the midpoint of an old road from Tredegar to Newport. 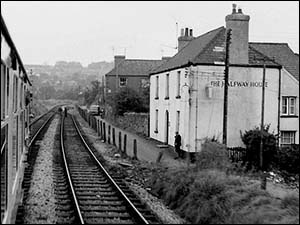 One of the earliest landlords here was the poet and landscape architect Aneurin Jones (1822-1904), whose bardic name was “Aneurin Fardd”. He also inherited Gelligroes Mill from his father. He organised the Gelligroes eisteddfod, held at least once in the Halfway House. Later he became superintendent of parks in New York, helping to lay out Central Park. He was a poetry judge at American eisteddfodau and died in Los Angeles. See the Footnotes for more about him.

A railway line once ran north to south in front of the pub (where you see a small car park today). It was part of a web of tracks which enabled the Great Western Railway to move coal to Newport or England from pits to the north and west. Steam trains would sometimes halt here while the driver and fireman escaped the heat of the cab to down a swift pint of beer in the Halfway House!

The photo, from the RCTS archive, was taken from a passing train in the late 1960s and shows just how close the railway tracks were to the front door of the pub.

With thanks to W Gordon Davies of the RCTS

Website of the RCTS (Railway Correspondence and Travel Society)

Aneurin’s father John, also a poet, was the miller at Gelligroes Mill, a job later performed by Aneurin. In 1859 a Welsh-language newspaper reported that Eisteddfod y Gelligroes would be held at the Halfway House. A disapproving reader wrote to the paper claiming the purpose was to “foster corruption”. If the intention was to improve morals and fertilise minds, there were plenty of other sites for the event, and he was dismayed that prominent Welsh bards had promised to take part.

Aneurin Jones also taught the local poet William Thomas (“Islwyn”) and founded a printing press. He was a trained architect and talented landscape architect. He emigrated in 1864 and became superintendent of parks in New York, where he was involved in laying out Central Park. He later worked on developing parks in nearby Brooklyn.

In 1903 he was offered the job of city landscape architect in Los Angeles, where he would help to design what became Griffith Park, a large area which overlooks the famous hillside Hollywood sign. The land had been donated to the city by Colonel Griffith J Griffith, who hailed from the Garw Valley (near Bridgend) and made his fortune in the USA.

By the time Aneurin had moved to Los Angeles, Griffith was no longer a member of the commission overseeing the park’s development. Aneurin lodged a claim for $2,675 in spring 1904, on the grounds that the job he was offered had been given instead to the city’s parks superintendent. He died in September 1904 and was buried in Los Angeles.