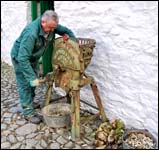 Outside the tea room at Haulfre Gardens you can see an old cast-iron farm implement, which has long been used as a decorative flower planter here. It is a manually operated root cutter.

Root vegetables such as swedes and turnips were fed into the hopper. A handle was attached to the axle, which protrudes at the front, to rotate the cutting blades inside. The chopped vegetables emerged below, ready for feeding to livestock. This was much less laborious than cutting vegetables with a knife, and root cutters like this one were common on smallholdings. The pictures on the right show a root cutter in use at Muckross House, near Killarney, Ireland.

The example at Haulfre was made by Corbett, Williams & Sons of the Phoenix Iron Works in Rhuddlan, near Rhyl. The works was operated by John Williams & Sons for decades until 1908, when agricultural engineer Francis Corbett became chairman and managing director. His surname was then added to the company’s title. Root cutters are among the items listed in the advertisement shown here, dating from Jan

The company made many types of farm implement, as well as water tanks, farm buildings and an “oil engine” big enough to powe 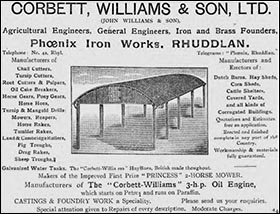 r dairy machinery. It won many prizes for its improvements to farm devices. In 1909, for example, its “improved chaff cutters” took first prize at the Welsh National Agricultural Society’s show in Aberystwyth.

Where this particular root cutter was used is unknown. One possibility is that it was at Tŷ Draw, a farm a little to the west of Haulfre Gardens. In the first half of the 19th century, this farm supplied most of Llandudno, then a village, with milk, butter and other farm produce. It had five or six strong horses, which were employed supplying goods and hauling equipment up to the local copper mines and bringing the ore down, on sleds, to the dressing floors near the sea.

With thanks to John Lawson-Reay, of the Llandudno & Colwyn Bay History Society, and to the Trustees of Muckross House (Killarney), County Kerry