In memory of Arnold Dargie 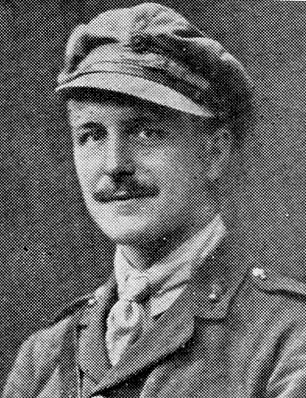 Arnold Dargie was educated at Grove Park School in Wrexham. His parents were Mr and Mrs Thomas Dargie of Derwen Deg, Upper Bangor.

He excelled as a footballer, playing for Bangor FC and three times in the Wales amateur international side from 1909 to 1911. He was a prolific goal scorer, notching up more than 100 for Bangor. He played briefly for Liverpool FC’s reserve side.

Before the outbreak of war he received a commission with the Welsh (Caernarvon) Royal Garrison Artillery. He went to France as a Lieutenant in 1916, soon to become Captain of the Battery. Serving with the RGA’s 137 Heavy Battery in 1917, he was killed in France on 18 September 1917. Welsh soldiers stood around his grave and sang the hymn Beth sydd i mi yn y byd (“What is there for me in the world”) to the tune of “Aberystwyth”.  He is buried at Bully-Grenay Communal Cemetery.

On 3 October 1917 a service in his memory was held at the English Presbyterian Church in Princes Road, Bangor. Field Marshall Sir Douglas Haig mentioned him in a dispatch on 7 November.

In 1936 his father funded a new grandstand at Bangor FC’s Farrar Road ground, in memory of Arnold.