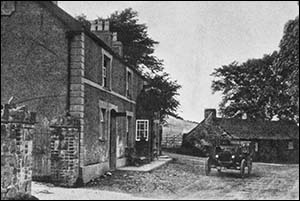 This building was also known as the Half Way Inn in the early 20th century, when the tenant was involved in a court case over “shebeening” (illegal sale of alcohol).

Y Bedol is Welsh for “The Horseshoe”. The next building to the north was a smithy. It’s behind the car in the photo on the right.

Before the Conwy Valley got its railway, horse-drawn coaches would often stop at Y Bedol, which was also popular with artists and anglers. Through much of the Victorian era the pub was run by Miss Mary Williams. She was born at the inn and lived here for 60 years. She died in 1903.

The local economy received a boost with construction of the aluminium factory at Dolgarrog and reservoirs in the nearby hills. By 1907 the road from Llanrwst to Dolgarrog was in a “shockingly bad state” and there wasn’t enough space at Llanrwst station to store all the materials which arrived by train for onward carriage by road. William Roberts, tenant of Y Bedol, won a contract to cart some of the materials to Dolgarrog from Tal-y-cafn station. 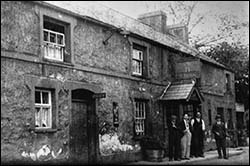 Mr Roberts was summoned to court in 1910 for supplying casks of beer to Owen Hughes, a Conwy grocer who was illegally re-selling the beer to navvies – hard-living labourers – who were building the dams and factory. Mr Hughes was caught when a policeman, disguised as a navvy, bought a pint of beer at his hillside hut near the dams.

The hundreds of navvies who camped there could buy beer from other huts too, saving them a walk of more than two hours to the nearest pub and back. Mr Hughes’ solicitor said the police had previously turned a blind eye to the practice “because it prevented a lot of rough, uncouth men going down into the village at night to make a row”.

Mr Hughes was fined £5. The charge of abetting against Mr Roberts was withdrawn, but he was fined a token one shilling for dealing wholesale in beer without a licence.