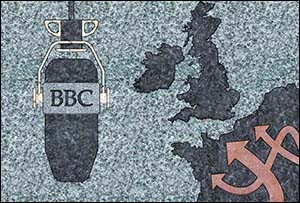 This granite postcard on the prom at Colwyn Bay relates to a secret broadcasting studio which was set up in the Second World War in the town centre. It was one of several hidden studios which the BBC would have used for communications had the Nazis bombed Broadcasting House in London or managed to invade southern Britain.

The studio equipment was installed on the first floor of Penrhyn Buildings, which still stands at the corner of Penrhyn Road and Princes Drive. Click here to see our web page and map about the buildings and studio.

When the Government requisitioned the building for war use, the restaurant on the ground floor was closed. The existence of the studio was unknown to most local residents throughout the war and well after. Secrecy reduced the risk of the Nazis finding out the location of the studio, which they could then have sabotaged.

The small cohort of trusted staff at the studio included two brothers who had both received the Military Cross for their conduct in the First World War.