As they left chapel one Sunday in December 1907, residents of Criccieth looked out to sea in this vicinity and were horrified to see a sailing ship being blown towards the rocks.

The three-masted schooner Owen Morris had left Porthmadog seven months earlier with a cargo of slates for Hamburg. It then crossed the Atlantic with salt for eastern Canada, where it was loaded with salt cod for Genoa, Italy. There was no onward cargo available in Genoa, so Captain David Roberts returned to Porthmadog in ballast (with stones in the hold to stabilise the ship). A fast passage was achieved, despite storms in the Bay of Biscay, and the schooner reached Tremadog Bay in 21 days.

A squall swept in from the south west as the ship was halfway across the bay. The Owen Morris was in the perilous position of being in ballast and being blown towards the shore, in full view of Criccieth’s population. 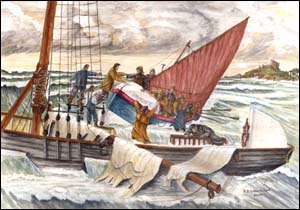 To launch the Criccieth lifeboat off the beach, through the breakers, the crew (in the boat) had to haul on a rope tied between a tall post by the lifeboat station and a buoy moored about 100 metres offshore. Only when the boat was clear of the surf could they hoist the big lug sail. More time was lost because the boat had to beat well to windward before it could turn and run downwind towards the Owen Morris, now inside the heavy surf off Black Rock, the promontory 3km east of Criccieth. The ship’s sails had all blown away. One anchor cable was dragging uselessly, the other had snapped.

The lifeboat passed alongside the stricken vessel twice. All six crew members leapt onto the lifeboat, minutes before their ship was blown into the cave on the east side of Black Rock. Local man Henry Hughes and his family walked from Morfa Bychan (on the far side of Black Rock) to witness the ship’s final moments. He recalled later how the ship’s bell had tolled “in melancholy notes” as the Owen Morris was torn apart.

You can read more about the Owen Morris on our page about the Prince of Wales pub, which incorporates one of the ship’s timbers. The painting of the rescue is by local artist and historian Robert Cadwalader.

Other SHIPWRECK HiPoints in this region:
Criccieth lifeboat station - men who had clung all night to remains of a wrecked barque were rescued in 1885
Porthmadog Maritime Museum – displays copper from local brig, wrecked on Scilly Isles