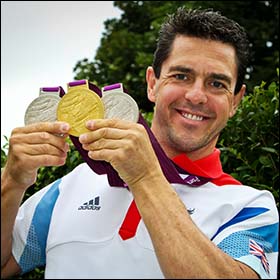 This post box was painted gold in 2012 to celebrate the gold medal won by Mark Colbourne at the Paralympic Games in London. He won the medal less than four years after being paralysed in an accident.

Mark was the first British contestant to win a medal at the games, a silver for the 1km sprint for classes C1 to C3. He followed this with a gold medal in the C1 3km individual pursuit on 31 August 2012. C1 is the class for cyclists with the most severe physical limitations.

He also won a second silver medal at the games, this time in the 10-mile (16km) individual time trial for on-road cycling.

Mark was born in November 1969 to Margaret and Cecil Colbourne. Cecil worked for 40 years for the British Steel Corporation, later Corus. Mark took part in many sporting activities, including swimming in an outdoor pool, as he grew up in Tredegar.

As a young man he worked as a designer and maker of stained glass, competing in his spare time at various sports including triathlon. He played volleyball for Wales in the early 1990s.

In May 2009 the canopy of his paraglider broke at Rhosilli, Gower. He fell 12 metres to the ground, suffering a broken back and lower leg paralysis. He was in hospital for several months. During that time he was visited by Anthony Hughes, a manager at Disability Sport Wales, who explained the various sports Mark would be able to try. In September 2009, Mark set himself the goal of competing in paracycling.

In 2013 he was awarded the MBE (Member of the Order of the British Empire) honour.