It may be hard to believe that this tranquil countryside once hosted an RAF airfield, with all its bustle and noise. 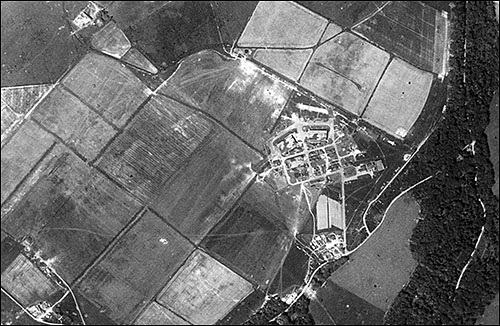 In 1940 work began on a small airfield close to the village of Malltraeth. The land had been requisitioned from the Bodorgan Estate for use by the Air Ministry.

The aerial photos are shown here courtesy of the Welsh Government. The upper photo was taken in June 1942 and shows how the former field boundaries were painted across the airfield, to deceive the enemy. The lower photo shows how the painted boundaries had disappeared by August 1945 (after the war in Europe had ended).

Initially RAF Aberffraw, as it was first known, was home to pilotless aircraft (full-size biplanes) that were used as targets by gunners at nearby Tŷ Croes artillery range. The drones were known as “Queen Bees” and were radio controlled. Some flew out to sea after control was lost, and one crashed into Snowdon!

In May 1941, more land was requisitioned and the airfield was renamed RAF Bodorgan. Apparently this was easier for non-natives to pronounce! At this point the airfield became an overflow facility for the Maintenance Unit at RAF Hawarden. Fighters and bombers were stored at the site. 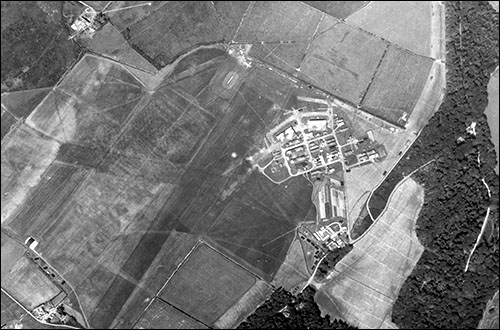 Although the airfield was never a victim of enemy action, several aircraft from RAF Bodorgan crashed during the war, killing crew members.

Latterly the airfield housed Italian “co-operators” – prisoners of war who volunteered to work in Britain after Italy’s surrender in 1943. By late December 1945, RAF Bodorgan wasn’t needed and the land reverted to the Bodorgan Estate.

Today there’s still evidence of the RAF’s presence, including several defensive “pillboxes” and loop-holes (narrow openings for outgoing gunfire) in walls. Pillboxes were squat concrete huts with small holes for gunfire. If you’ve just scanned the QR codes at the Hermon crossroads, walk 120 metres south along the minor road and Wales Coast Path to see a pillbox in the field on your left. Further along the coast path you can see some of the former aircraft hangers on your right (west of the road). See the markers on map below.

With thanks to Adrian Hughes of the Home Front Museum, Llandudno