This peaceful spot on the Lôn Las Peris cycling and walking route is ideal for appreciating the area’s natural history. On one side is the large, deep lake called Llyn Padarn. On the other side is Llyn Tan-y-Pant, where the water was trapped by the creation of the railway embankment (now Lôn Las Peris) in the 1860s. The shaded, shallow water contrasts with the open expanse of Llyn Padarn and is preferred by some species of flora and fauna, including the swans which nest here (pictured below by Ken Latham). 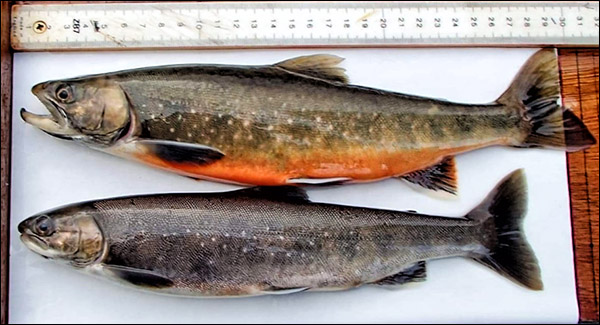 The whole of Llyn Padarn is a Site of Special Scientific Interest. A rare type of fish called Torgoch, or Arctic charr, lives naturally in this lake and two others in Snowdonia (Bodlyn and Cwellyn). Humans have transferred it to other lakes in Snowdonia in case the population in any one lake should suffer catastrophic decline.

According to local legend, recorded in 1662, Torgoch was brought here from Rome by early Christians. The scientific explanation is that it was once a migratory fish (living in the sea and breeding in rivers) but was isolated here by the last Ice Age. Since then the population in Llyn Padarn has evolved to be genetically unique – different from the Torgoch of Bodlyn and Cwellyn. 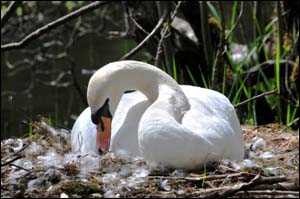 The upper photo, courtesy of Walter Hanks, shows an unusually large pair of torgoch (c.30cm long) temporarily netted at a time when phosphates increased nutrients in the lake (the usual length is about 20cm to 23cm). The male exhibits the red colouring it develops in late autumn for the December mating season, when the fish lay eggs in the short river between Llyn Padarn and Llyn Peris.

Torgoch were fished commercially. In 1896 a new boat was launched for this purpose, as you can read on our page about the lake’s boating history.

In summer 2009, the Torgoch population was threatened by mass algal growth in Llyn Padarn, because the water was warm and had too high a concentration of phosphates. Phosphates enter watercourses from detergents and fertilisers. Algae thriving on phosphates deplete the water of oxygen, on which fish depend. Measures were implemented to prevent this recurring at Llyn Padarn.

Llyn Padarn’s fish are food for other wildlife including otters, which are best seen near the lake’s outlet at Brynrefail.

Another inhabitant of these waters is Floating water-plantain (Luronium natans), a rare plant native to Snowdonia and Mid Wales. It spread into England along some canals. It’s hard to distinguish from other vegetation except in summer, when a small white flower with three white petals and a yellow centre appears above the floating leaves.

With thanks to Robin Parry, Walter Hanks and Ken Latham