The cathedral for the diocese of Monmouth is dedicated to Gwynllyw. Woolos is an anglicised version of his name. According to legend, Gwynllyw was a warlord who converted to Christianity because of the influence of his wife and son Cadog.

Gwynllyw was told in a dream to build a church, in penitence for the sins of his earlier life, wherever he found a white ox with a black spot on its forehead. He found such a beast at the top of Stow Hill, and built a wooden hermitage there. He died in his son’s arms on 29 March 500AD, and his day is still observed on 29 March each year. A symbolic sculpture of the ox, known as the “Bell Carrier”, stands in a shopping precinct in the city centre (east of Commercial Street).

To hear how to pronounce Gwynllyw, press play: or, download mp3 (20KB)

He was buried at the site of today’s cathedral. The earliest church building here, probably of timber and mud, was replaced several times, possibly where St Mary’s Chapel now stands. This was previously a Galilee Chapel, forming an entrance to the nave, and connects the nave to the west tower. Some of its masonry dates from Saxon times, and most from c.1200. 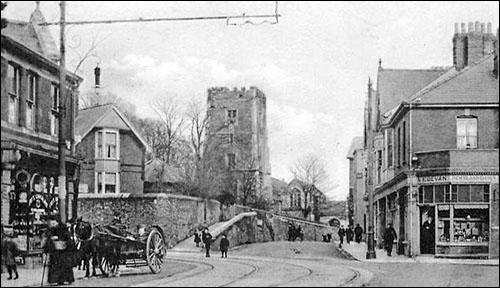 The church was attacked several times – by Irish pirates in 846, Danish Vikings in 875, by the forces of Earl Harold in 1060 and by Owain Glyndŵr’s rebellion in the early 15th century. King William II granted the church to St Peter’s monastery in Gloucester in 1093. They probably funded construction of most of the current nave, including its Norman arch. This spectacular arch rests on Roman columns which were reputedly taken from the Roman Legionary fort at Caerleon, north of Newport.

Baldwin, Archbishop of Canterbury, visited Newport in March 1188 on his journey through Wales to recruit for the third crusade. He was accompanied by Gerald of Wales, who recorded the tour in detail. Gerald wrote that Newport is where the river Usk flows into the sea, having started in Cantref Bychan. Many men “took the Cross” (enlisted for the crusade) in Newport.

It’s said that the tower was funded by Jasper Tudor after his nephew was crowned King Henry VII. Jasper was Henry’s mentor during the Wars of the Roses, when both were exiles in Brittany and France, and played a key part in Henry’s victory at Bosworth in 1485. The lordship of Newport was one of many rewards the new king gave Jasper, who spent some of his large fortune on repairing and improving churches in South Wales.

The church was controlled by the Bishopric of Gloucester from 1540 (after King Henry VIII ordered the dissolution of monasteries) until 1882. In this period many of the decorations were removed as Puritanism took hold in South Wales. A gradual restoration began in 1853. Further expansion of the building followed the creation in 1921 of the diocese of Monmouth, as part of the Church in Wales’ disestablishment. In 1949 the former parish church of St Woolos was confirmed as the diocesan cathedral.

In 1839 the bodies of 10 Chartists were buried secretly, in unmarked graves, outside the church. They had been killed while taking part in a pro-democracy protest outside the Westgate Hotel. A plaque in the cathedral churchyard commemorates the Chartists who died.

St Woolos Cathedral has a peal of 13 bells, a number equalled in Wales only by Llandaff Cathedral. They are rung every Sunday morning by a dedicated group of bellringers. One of the church’s bellringers, Fred Powles, died in the First World War.