It’s hard to believe today that this tranquil spot was a busy colliery! Some colliery structures survive within the country park. If you’d like to view them, please use the link below to ask to arrange a visit. 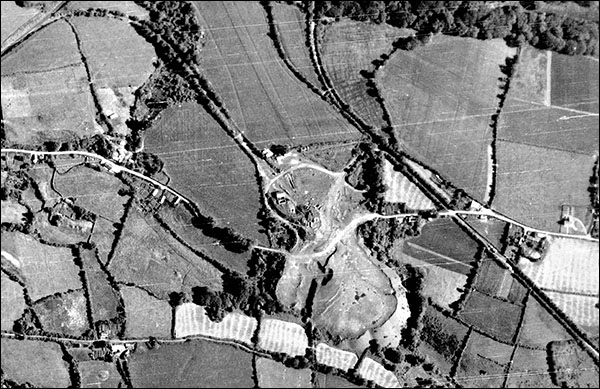 Bonville’s Court Colliery started producing high-quality anthracite in 1842. It was named after a large house to the north. Bonville’s Court Farm was near the colliery site. Members of the De Bonville family were medieval Norman settlers in Pembrokeshire.

The colliery, one of the county’s largest, was developed from the 1860s by London solicitor Charles Vickerman, owner of Hean Castle and other properties. His son Charles succeeded him as proprietor of local collieries, living at harbour-side St Issell’s House.

In 1879 a thick new coal vein was discovered here. Colliers returned to full-time work, having been on reduced hours for four months.

There was no shortage of buyers for Pembrokeshire anthracite – ideal for steam engines, drying hops and malting. It was used by the Royal Navy, Queen Victoria’s yacht Fairy, Brunel’s SS Great Britain, the North London Railway and many others.

In 1903 Bonville’s Court Colliery employed 215 people. It closed in 1930 but machinery here continued to process coal from other sites. The aerial photo of the site, courtesy of the Welsh Government, was taken in 1946.

The building which housed the colliery’s stationary steam engines still stands, as does the weighbridge hut where coal was weighed before despatch.

The raised area of ground in the country park is where the shaft reached the surface. Winding gear stood over the top of the shaft. The raised ground enabled coal to be tipped directly into screens for grading and railway wagons at ground level.

The colliery had its own railway down to the harbour (see the line leading to bottom right of photo). Part is now a footpath, beyond which the track ran along The Incline. The track was extended to Saundersfoot station for coal distribution via the rail network. The volume of coal justified building a direct spur from the main railway (top left of photo), so that main-line wagons could be loaded at the pithead.

Fatal accidents sometimes happened here. In 1908 land agent WP Wilson was visiting to make a valuation when a gust of wind blew the end of his coat into some machinery. The rotating cogs pulled him to his death over the guard structure which was supposed to prevent accidents.