This interior window in the Level 3 foyer was the largest secular stained glass window in Britain when it was unveiled in 1985. It was a gift from Cardiff’s German twin city, Stuttgart. It was unveiled by the Mayor of Stuttgart, Oberbürgermeister Manfred Rommel. His father was Field Marshall Erwin Rommel (the “Desert Fox”), one of Germany’s most accomplished military leaders in the Second World War.

The window was designed by Hans Gottfried von Stockhausen. The design features a Welsh landscape with its sprawling valleys and flowing rivers. There are references to Welsh culture – see if you can spot the rugby posts! 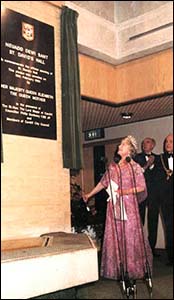 The window forms the backdrop of the Level 3 Stage, which hosts comedians, folk concerts in the Roots Unearthed series and performances from Cardiff’s own Capital City Jazz Orchestra. Live performances are occasionally broadcast from here by BBC Radio Wales.

To the right of the stage and window is a plaque commemorating the Hall’s official opening. The plaque was unveiled by the Queen Mother on 15 February 1983. At the ceremony (pictured left), she said: “This exciting development will add greatly to the quality of life for the city of Cardiff and the people of the Principality.”