Here a public footpath passes the 16th-century Tŷ Mawr – one of the earliest examples of a Snowdonian gentry house. It’s a private residence. Please enjoy the view from the path and respect the occupants’ privacy.

Until Nantlle village was developed in Victorian times, Tŷ Mawr and its land were known as Nantlle. Earlier still, the holding was known as Baladeulyn, which in the 13th century belonged to Einion ap Caradog, a relative of Owain Gwynedd (king of Gwynedd in that century). King Edward I stayed at Baladeulyn for a few weeks in 1284. His men had seized the property that year. The name Baladeulyn refers to the land’s position between the upper and lower lakes (the latter was drained in the 1890s).

The land here was granted to Tudur ap Gronw in 1346 for his services at the battles of Crecy and Poitiers in the mid-14th century. His great-grandson Richard ap Robert inherited the property and died in 1539. From Richard it passed to his son William. One or both of these men probably initiated construction of the Tŷ Mawr we see today. 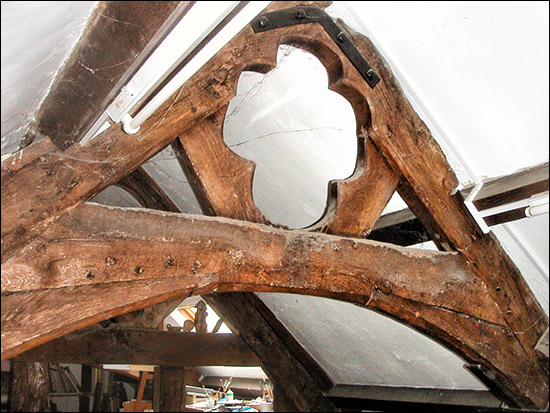 Sampling of timbers in the property has established that they came from trees felled between 1536 and 1556. The photo of rafters is shown here courtesy of Adam Voelcker.

Ownership passed to the Owens family of Anglesey and of Orielton, near Pembroke, before the property was bought in 1808 by the Rev Edward Hughes, owner of the Kinmel estate. He leased land to slate entrepreneur William Turner, who developed the Penyrorsedd quarry (north of Nantlle village).

Tenants lived in Tŷ Mawr from the 17th century onwards. They included managers of Penyrorsedd quarry for many decades until the 1950s. The Kinmel estate sold the property (including the house, land and nearby quarrymen’s barracks) c.1970 to Mr and Mrs Nottingham, tenants here from 1963. He worked in Caernarfon. The couple brought up four children here before selling the property in the mid-1990s.

Tŷ Mawr was built to a high standard for its time, with thick walls and even an inside toilet – the waste chute from which still projects from the south gable! A passage runs between the front and back doors, separating the main room (known as a hall) from a parlour and service room. A stone staircase beside the hall fireplace leads up to two large chambers, originally open to the roof. The dormer windows illuminate the attic, which was formed later.

With thanks to John Dilwyn Williams and other members of the Discovering Old Welsh Houses group, and to Adam Voelcker