Despite its name, this park was planned as a recreation ground for sports and a children’s play area, rather than a garden. The focus was on open space, although the park received some ornamental plants before opening in 1895. 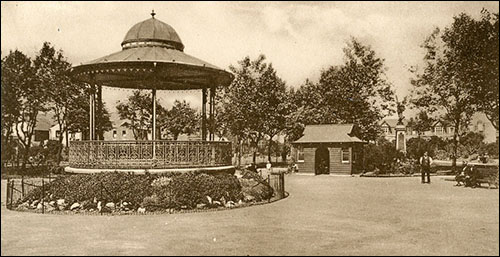 Land for Grange Gardens was gifted mainly by Lord Bute of Cardiff Castle, the rest by Lord Windsor. Waste material was tipped to create a firm surface on what was when a marshy area.

In medieval times the area was farmed by Cistercian monks and known as the Grange of the moor. Grange Farm still existed (a little to the west of here) until it was used for housing in the late 19th century.

The new park included a “watchman’s shelter” and a cast-iron bandstand, which cost £100. The decision in 1894 to install a bandstand here and in Moorland Gardens – the first ones in Cardiff – prompted complaints from some councillors. They were worried about the cost if every neighbourhood expected to have a park bandstand! Bands which entertained at Grange Gardens in the early 20th century – when recorded music wasn’t widely available – included the East Moors Band, Canton Brass Band and Splott Temperance Band. 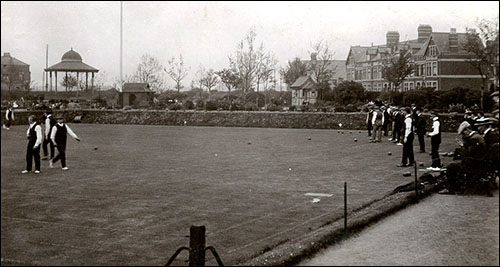 Facilities for bowls, tennis and quoits were provided in the park. The old postcards of the bandstand and bowling green are shown here courtesy of the Cardiff Parks website (see link below).

The Samuel family donated drinking fountains for Cardiff parks in memory of family members. The one installed in Grange Gardens in 1909 included a canopy and commemorated Rachel Joseph, nee Samuel. The family was descended from a Jewish watchmaker and his wife who had emigrated from Poland to Britain.

Grangetown war memorial was erected in the park in 1921. The bandstand, fountain canopy and railings were removed during or after the Second World War. New railings were provided in 1991. Replicas of the bandstand and canopy were installed in 2000 as part of a major refurbishment of the park, aided by the Heritage Lottery Fund.

The park’s 1960s bowling pavilion fell into disuse but was revived in 2016 by the Grange Pavilion Project. The building was replaced in 2020 by a new one, designed for various uses – follow the link below for details of activities and facilities.