A short distance north of the car park here stand the remains a prehistoric tomb, known as Arthur’s Stone or Maen Ceti. This area, Cefn Bryn Common, is internationally important for wildlife – see below. 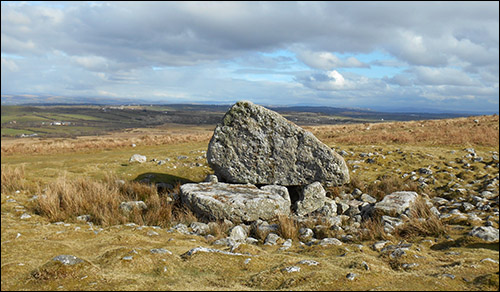 The hilltop stone is a 25-ton glacial boulder, deposited in the last Ice Age by the retreating ice sheet. This is known as an erratic. Around 5,000 years ago, in the New Stone Age, Neolithic people excavated under the boulder and propped it up to create a double-chambered tomb, with the boulder as the capstone.

Various myths surround the stone. The most famous is that King Arthur found a pebble in his shoe when he was in Carmarthenshire and threw it over the Loughor Estuary. It landed on Cefn Bryn Common, having grown in size from being touched by the king’s hand.

Historian David Watkin Jones hinted at another tale when he described the stone in his Hanes Morganwg in 1874 as Maen Cetti or Coeten Arthur – “Arthur's quoit”. Quoits is an old game using throwing and aiming skills. See the footnotes for more about the stone’s names.

Another legend is that the piece of stone lying to the side was sheared off by Dewi Sant (St David) with his sword in protest at people continuing with pagan Druidic worship. It’s more likely that the shearing off was caused by rainwater repeatedly entering cracks, freezing and thawing.

Cefn Bryn Common is a Special Area of Conservation and Site of Special Scientific Interest because of the habitats and species it supports. On your walk up to Arthur’s Stone, look out for flowering plants in spring to mid-summer. They include sundew, a carnivorous plant. Its sticky leaves attract insects as prey. 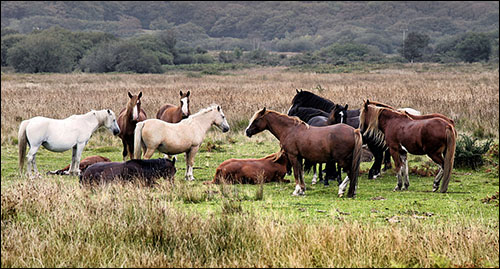 In late summer to early autumn, the common is swathed in yellow and purple – the flowers of Western gorse, heather and cross-leaved heath. On a summer evening you might be lucky enough to spot a southern damselfly. Cefn Bryn is one of only a handful of locations for the species in South Wales.

Although the landscape is entirely natural, intervention is needed to prevent woodland covering most of Cefn Bryn and retain the diversity of habitats and species. Traditional management methods include Commoners bringing ponies here to graze, and controlled burning of small patches.

With thanks to Richard Morgan, of the Welsh-Place Name Society, for stone-name information. With thanks to the Gower AONB Partnership, led by Swansea Council with support and funding from Welsh Government and Natural Resources Wales

Footnotes: More about the stone’s names

In 1693 John Williams, a correspondent of antiquarian and natural scientist Edward Lhuyd, stated that local people attributed Arthur’s Stone to the legendary Arthur owing to its “extravagant size and strength”. Maen Ceti means “stone of (a man called) Ceti” and appears only in later sources. The first written reference to it appears to be by the travel writer and antiquarian Benjamin Heath Malkin (1769-1842). The same personal name is found in Ynys Ceti and Kilgetty/Cilgeti (Pembrokeshire) but nothing is known about Ceti.