Site of Pompren barytes mine and pier, Aberdaron

Site of Pompren barytes mine and pier, Aberdaron

This end of Aberdaron beach was a site of industrial activity in the early 20th century, when barytes were mined here and shipped via a new pier.

Barytes or “heavy spar” (barium sulphate) is an insoluble mineral which has many uses – today mainly as a weighting agent in drilling for oil and gas (drilling mud). In its pure white form it’s used as a filler in paints, paper and ceramics.

Between 1905 and 1913 and briefly in 1918, barytes was intermittently quarried and mined east of the Afon Saint. It was certainly worked much earlier than this. The barytes, in small pockets, was said to be of good quality, meaning white in colour. 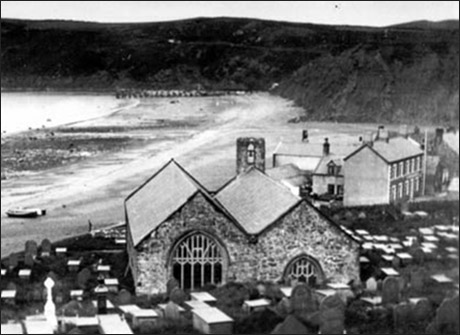 No more than four men worked at any time at the Pompren barytes mine. Initially the barytes would have been loaded onto ships on the beach.

In 1905 Evan J Evans, a chemist from Aberystwyth, applied to build a pier c.90m long, extending as far as low water. The pier appears to have been equipped with a tramway so that the barytes could be tipped directly into ships. It is visible at the far end of the beach in the old photo (copyright: Gwynedd Archives Service). Part of it can be glimpsed in the old photo on our page about Tŷ Tan yr Allt (the white speck on the hillside beyond the pier in the photo on this page).

The pier was still in good order in 1921 but was later demolished. You can see remnants at low tide: two lines of wooden stumps on the beach.

A water-powered mill ground the barytes to powder on the shore, just above high water. Remnants of it are still visible.

Evan owned the mine until 1911. In 1908 he was fined £1 for storing c.18 gelignite balls in an unlocked, unregistered shed. He told the magistrates that he was a poor man trying to provide work for local people, and the fine was excessive because the gelignite was harmless unless attached to a detonator. Evan also quarried limestone at Mynydd Mawr before the First World War.

Pompren is Welsh for a wooden footbridge. There was probably one over the Afon Saint near the shoreline.

With thanks to Michael Statham, of the Welsh Stone Forum, and to Gwynedd Archives Service for the old photo