This castle was besieged, defended and captured many times in the medieval period, before it was partially demolished in the 17th century to prevent its use in the Civil War. In the 15th century Edmund Tudor, father of King Henry VII, died soon after being imprisoned here by Yorkists. 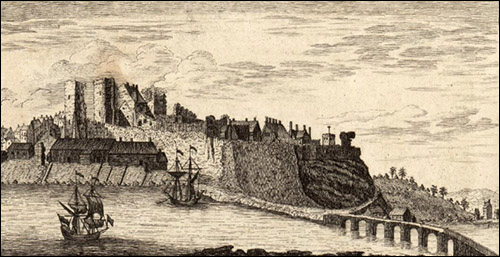 The castle evolved from a motte and bailey defence on the site, built in 1109. The stone castle had probably been built by the time it was captured by Llywelyn Fawr, the first Prince of Wales, in 1215. He held it until 1223, when it reverted to the English crown. From 1280 it was the official headquarters of the government of South Wales. The rebel forces of Owain Glyndŵr took the castle in 1405.

In 1456 King Henry VI sent his half-brother Edmund Tudor to restore royal authority in South Wales. Having secured Carmarthen Castle and been made its custodian, Edmund was imprisoned by Sir William Herbert and others loyal to Richard of York, who saw himself as heir to the throne and was nominally the castle’s constable.

Edmund died in Carmarthen on 3 November 1456, aged 25, possibly a result of general poor health, disease or maltreatment in custody. He was buried at Greyfriars’ Priory in the town, and later moved to St Davids Cathedral. His wife Margaret Beaufort was pregnant with their son Henry, who founded the Tudor dynasty. Henry was born on 28 January 1457 and spent most of his childhood as a ward of Sir William Herbert, growing up with the Herbert children at Raglan Castle. Later he went into exile in France with Jasper, Edmund’s brother.

During the subsequent Wars of the Roses, Carmarthen Castle was controlled by Sir Rhys ap Thomas, chief justice of South Wales. His support was decisive in Henry Tudor’s victory over King Richard III at the Battle of Bosworth in 1485.

In the 18th century a new jail was built inside the castle, by then in ruins. The jail was later enlarged to occupy most of the castle site. The picture above of the castle and town (courtesy of the National Library of Wales) was included in Thomas Pennant’s books about Wales in the late 18th century.

The jail site was partially reused in the 1930s for the new County Hall, headquarters of Carmarthenshire County Council. Castle House, now a tourist information centre, stands inside the castle remains and contains Victorian custody cells.