The Glamorganshire Canal once passed through this area. It was a little north of the western part of today’s Excelsior Road. 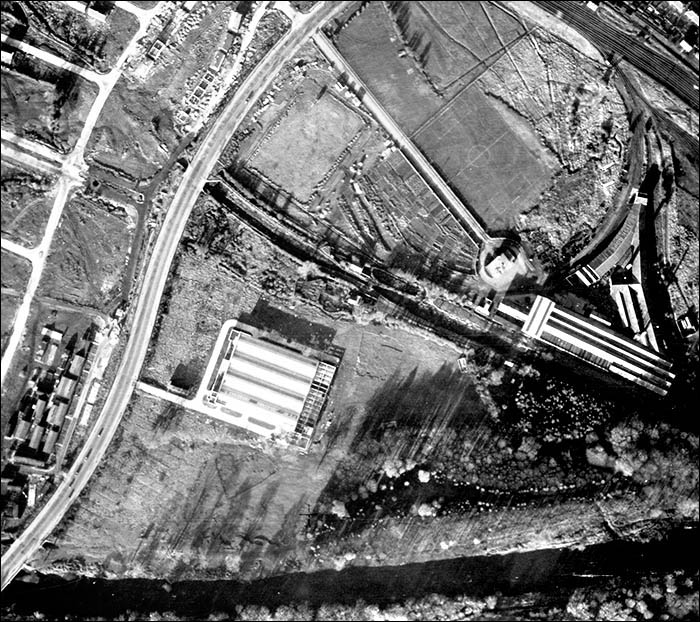 The canal, built in the 1790s, carried much of the industrial output of the Pontypridd and Merthyr Tydfil areas and the Cynon Valley. It was at its busiest before the Taff Vale Railway opened its first route in 1840.

The underpass near the junction of Western Avenue and Excelsior Road was originally a bridge over the canal. Western Avenue was constructed in the 1930s in response to the growth in motor traffic. The canal was little used by then, but had to be bridged.

The bridge is visible the 1947 aerial photo, courtesy of the Welsh Government. By then, the council had started to fill in the canal, as you can see in the top left corner of the photo. New roads have been laid in that area, and houses are under construction on Western Avenue North and Western Drive.

On the right of the photo is the Excelsior Wire Rope Company’s factory, with its own railway sidings. It was built in 1902 on the site of a soap works. The route of the canal eastwards from that site is now a walking and cycling path through the woods to Blackweir.

In the centre of the photo is Mynachdy lock, where boats were raised or lowered so that they could proceed along the higher or lower parts of the canal. Below the lock you can see a Post Office depot, where Tesco is today.