This old mill building is now home to Deiniolen Silver Band, which was founded by slate workers in 1835.

Several mills in Clwt y Bont produced writing slates. The largest mills belonged to Samuel Jones. In 1828, when he was only 12 years old, he walked from Dolgellau to Clwt y Bont to take advantage of the opportunities available in the slate quarrying areas. 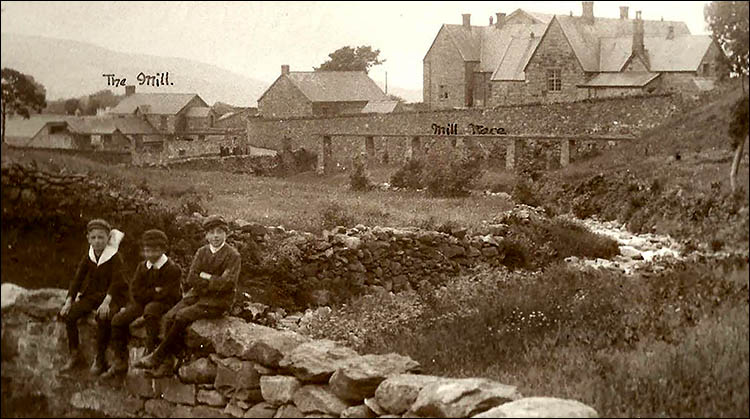 Over the following decades he opened several factories, including the Glandinorwig Slate Works in 1853. The building you see here today is the surviving part of the works. It produced ‘Crown’ slates for schoolchildren to write on, before paper was cheaply mass produced.

The factory was powered by a waterwheel. Water from the river Caledffwrd was brought to the wheel along an aqueduct, shown in the 1910 photo with the mill on the left and a school (now demolished) on the right. The mill race was derelict by then. You can see one of the aqueduct’s pillars in the car park north east of the building.

In nearby Corlan y Bont (to the east) there’s a surviving piece of the sluice which admitted water to the aqueduct. The sluice was near the wall on which the boys are sitting in the old photo.

By 1860 Samuel had opened a larger factory in Clwt y Bont. The company letterhead shows a selection of his premises, captioned as the departments for slate polishing, framing & finishing, and slate sawing & splitting.

The Deiniolen band was formed in 1835 by slate workers who wanted to play musical instruments in concerts and to mark special occasions. Within a year, a quarrel broke out among band members drinking in a local pub. Some lost their musical instruments in the fight, and some were so badly hurt they had to take time off work!

Deiniolen Silver Band has a long history of competing at band festivals and the National Eisteddfod and has won many awards. In 2019 it formed an additional group for people who had never played before or hadn’t played for many years. The group has enabled many local residents to enjoy making music together.

With thanks to Gareth Roberts, of Menter Fachwen