Canal tunnels were unusual in Wales, where canals mostly followed river valleys, but at Chirk there are two. This one is the longer, at 420 metres. It’s part of the Ellesmere Canal route devised by the great canal engineer William Jessop. Construction was overseen by Thomas Telford. 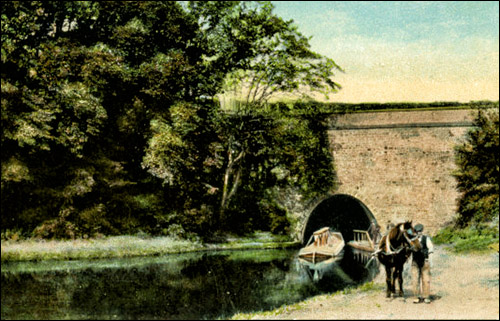 This section of the canal, now known as the Llangollen Canal, opened in 1802. The tunnels at Chirk were unusually wide for a narrow-boat canal because they were designed for horses to haul the boats through, using a towpath. Normally boats were moved through canal tunnels by men who lay on the boats and walked along the tunnel walls.

The tunnel took the canal between the Ceiriog and Dee valleys without using locks to climb to the higher ground and descend on the other side. Locks were inefficient – they consumed water and delayed the progress of boats.

A wide cutting was excavated south of the tunnel to provide space for boats to wait if another boat was passing through the tunnel or crossing the aqueduct. Boats turned around in the basin after the aqueduct opened in 1801 and before the tunnel opened the following year.

The Shrewsbury & Chester Railway was built in the 1840s at a slightly higher level. A cutting was dug above the canal tunnel. There the railway crosses from one side of the canal to the other.

The canal was built to transport goods but boat trips along this section were soon popular. For example, in 1855 children and teachers from the Baptist Sunday School in Cefn Mawr – with a “vast number of their friends” – had a summer outing on canal boats from Trevor basin (near Cefn Mawr). The boats passed through Chirk tunnel and moored at this basin, where the excursionists alighted for refreshments. After walking to Chirk Castle and back, they almost emptied the shops in Chirk of food!

Today the Llangollen Canal is a popular leisure route, looked after by the charity Glandwr Cymru the Canal & River Trust in Wales. The canal is a UNESCO World Heritage Site.