It may be hard to believe today, but steam trains used to thunder past this spot on their way from Swansea to Shrewsbury and even as far as York. 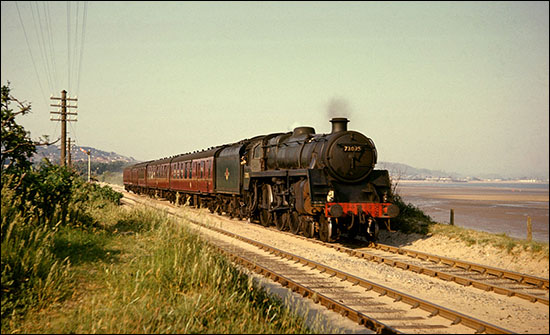 The photos, courtesy of John Davies, show trains in the 1960s passing Black Pill Burrows, the green area north east of here. The upper photo shows the daily train to York. Notice how much sand lay around the tracks. The lower photo shows the 2.40pm Shrewsbury to Swansea train nearing journey’s end.

The London & North Western Railway’s route ran alongside the beach for most of the way from Swansea Victoria station to Black Pill, where it began to curve through more than 90 degrees to enter the Clyne Valley.

Notice the higher ground where today’s coastal path and cycling route descends to the river bridge. That is where the railway climbed to cross over Mumbles Road and the Mumbles Railway on a bridge. There was a coal siding on the north side of the track here. The LNWR’s Mumbles Road station was just beyond the road bridge.

The railway was completed in 1867 by the Llanelly Railway & Dock Company, connecting Pontarddulais to Swansea Victoria. Initially it had only one track.

The LNWR – Britain’s biggest railway company in Victorian times – wanted to compete against the Great Western Railway to transport some of Swansea’s large industrial output. In 1873 it took over the railway from Shrewsbury to Pontarddulais – now known as the Heart of Wales Line – and the track from there into Swansea.

In June 1917 (during the First World War) the LNWR’s Black Pill bridge was attacked – by two companies of army cadets on exercise! The companies were from two churches, Holy Trinity and St James. Another company, from Sketty, defended.

The railway from Swansea Victoria to Pontarddulais closed in 1964. Today you can cycle or walk along most of the route.

With thanks to John Davies