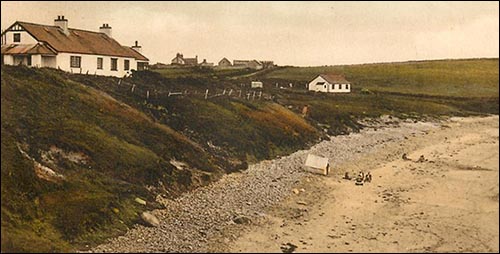 Borthwen Farm, by the Wales Coast Path at Porth Trwyn, used to be one of the principal farms of the Carreglwyd estate. Its buildings are listed because they form such a well preserved and comprehensive group. In the old photo of the beach, the farm buildings are visible on the skyline in the centre.

The farmhouse, at the southern end of the group, may date from the 17th century, with later additions and adaptations. As you can still see today, there were several outbuildings – reflecting the variety of work on an Anglesey farm in the 18th and 19th centuries. One building housed a smithy, cow-shed, calf-shed and storage space for root vegetables and had a henhouse attached. Another was for storing corn and carts. It included stables and a lean-to pigsty.

The Carreglwyd estate was owned by generations of influential Anglesey people. Carreglwyd House, less than 1km east of Borthwen Farm, was built in 1634 by Dr William Griffiths, King Charles I’s Master of the Rolls. A portrait of the king by the celebrated painter Anthony van Dyck is still at Carreglwyd. It was a gift to Dr Griffiths from the king. Members of the Holland and Stanley families, among others, married into the Carreglwyd family in later centuries.

The direct line ended in 1917 with the death of Lady Maria Emma Elizabeth Conway Reade. She had supported the temperance movement, setting up coffee houses in Llanfaethlu and in other villages as alcohol-free social venues. She founded the Llanfaethlu and District Nursing Association to provide healthcare for the poor, and often sent Christmas money or firewood to the poor in winter. She raised funds for the London City Mission, which focused on helping impoverished Welsh people in London, and presented many books to the fledgling University College of North Wales, Bangor.

An obituary noted that Lady Reade had also been a “great supporter of Protestant movements in Italy, Spain and Belgium”.

The Borthwen buildings ceased to be used for farming in the early 21st century. The farmhouse and some of the outbuildings are now available as holiday lets through Boltholes & Hideaways.