About 4km west of Betws-y-coed, the river Llugwy descends rapidly at the spectacular cascade known as Swallow Falls. Its proximity to Thomas Telford’s London to Holyhead coach road (now the A5) has made it a popular spot for tourists since the 19th century. The photo of the falls dates from the 1890s. 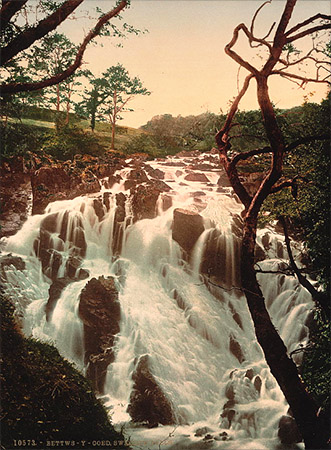 The cascade's name was recorded in 1773 as Rhaiadr y wenol or the Waterfall of the Swallow. This is thought to refer to the way the water resembles the tail of a swallow where a large rock divides the flow into two streams.

The accepted Welsh name today is Rhaeadr Ewynnol. Ewynnol is a relatively recent Welsh word (first recorded in 1795), meaning “foaming”. It was applied to the falls in Victorian times, apparently by Welsh speakers who reinterpreted y wennol (“the swallow”) as what they considered to be a more “correct” Ewynnol (“foaming”).

The falls were given to the local council in 1913 by Lord Ancaster. A small charge for visitors was introduced, to help pay for the council’s outlay on Betws-y-coed’s new water and electricity utilities.

In 1904, there were concerns over the visual impact of a planned light railway from Betws-y-coed to Beddgelert. The council passed a resolution that the railway would “seriously injure the surroundings” of the Swallow Falls and should pass in tunnel. A local newspaper opined: “The Swallow Falls are worth making a strenuous fight for.” The railway’s engineers said the route would be in tunnel or deep cutting at this location and the trains would be powered by hydro-electricity, avoiding “noise and smoke”. The railway was never built.