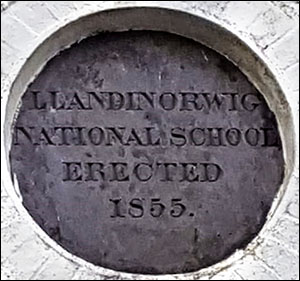 In November 1857 one visitor was astonished to find such a fine schoolroom in a place like Llandinorwig! He described it as having desks in parallel rows on one side, leaving ample space for standing. There was an infants’ gallery at one end.

An annual summer tea party at the school was provided by Thomas Assheton Smith and organised by Eliza Edwards. She was born in Caernarfon to Nonconformist sea captain John Richards and had married Rev Edwards in 1856. In 1872, 300 pupils paraded through Deiniolen behind the Llandinorwig Brass Band, before returning to the school for “tea and buns” and games in the field opposite the church.

In October 1857 there was local excitement when the Dolbadarn Hotel, Llanberis, loaned its harmonium (a small organ with a foot pump for air) for a concert at the school. The novelty factor drew an audience of 400 to listen to the Penrhyn Slate Quarry Harmonic Society, accompanied by the Royal Caernarfonshire Militia. 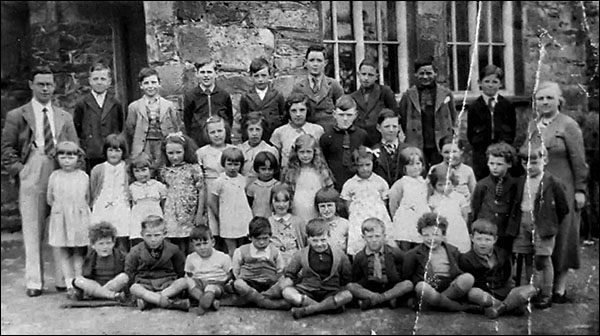 At a fundraising concert in the school in 1864, one of the performers was the esteemed baritone, composer, accompanist and professor of music John Owen, bardic name Owain Alaw. The event raised money for Jane Owen, daughter of the clerk at Christ Church, to receive a musical education from Owain Alaw. The Eryri Glee Society, the Deiniolen Glee Society, Jane Owen and her father also sang. Four years later, Owain Alaw’s only son William Henry – organist at St Bartholomew’s Church in Dublin – died in the Llanddulas railway accident, aged 23.

In 1900 the average school attendance was 98 pupils. The old photo shows pupils at the school in 1938.

A thanksgiving service for the school was held at Christ Church on 19 March 1964. The remaining 18 pupils received their last lesson on 26 March before the school’s closure. Today the building is owned by Wallasey & West Wirral Scouts and provides hostel accommodation for people exploring the mountains – follow the link below for details.