The name of this house refers to the two lakes which it overlooked – before one of them vanished! The house is a private residence. Please view it from the road but don’t enter the grounds.

The house’s name means “hill of two lakes”. An 1849 tithe map shows Nantlle Lower Lake just below some buildings in this vicinity. The breadth of the lake is shown in the painting from 1854, courtesy of Llyfrgell Genedlaethol Cymru – the National Library of Wales. The site where Bryn Deulyn was built (sometime between 1867 and 1879) is beyond the smoking chimney on the left, where slate quarrying is encroaching on the lake. 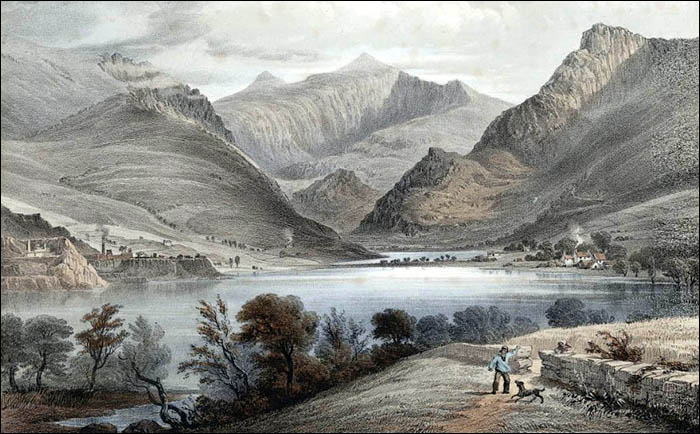 By 1879 Bryn Deulyn was home to William Herbert Jones, his wife Ellen and their three children. He had been manager of Tŷ Mawr East slate quarry (south of the lower lake) and in 1875 became manager of Pen-y-Bryn quarry, close to Bryn Deulyn.

Herbert chaired the committee for the £10,000 scheme to drain the lower lake. Two quarries had flooded and others were threatened. Pumping out water was expensive for Dorothea and other quarries. The ceremonial cutting of the first sod, west of Tal-y-sarn, in 1893 was attended by c.4,000 people. A wider course was dug for the river Llyfni over c.3km. The new riverbed was 2.4 metres below the lake’s level.

By 1899 the lake was much reduced, with marshy ground between it and the extensive quarry tips. By 1949 the lake didn’t exist. Today heavy rainfall sometimes causes the marsh to flood, when a phantom of the old lake appears!

By 1903 Bryn Deulyn was home to quarryman Ellis Williams and his family. He was still here in 1911, then aged 59, along with his wife Mary Ann, his son Robert Frederick, a male lodger and a teenage maid. All three men were quarrymen. After the Second World War, some local residents would go to Bryn Deulyn to buy paraffin from Frederick.

With thanks to Dr Dafydd Gwyn and Dr Hazel Pierce