This building, now the Pembrokeshire Herald’s offices, was completed in 1908 as the town’s main post office. The site was previously part of the Lord Nelson Hotel’s garden. 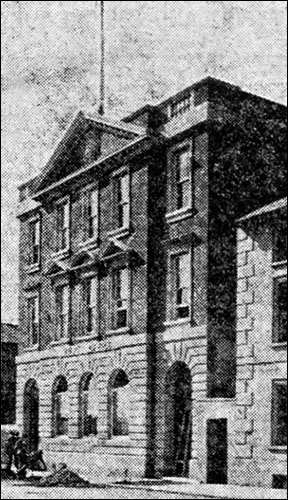 The 1908 photo shows the frontage with dressed stone on the ground floor and red brick above. The flagstaff at the top was used by signallers, standing on the flat roof, to send messages to ships in the harbour about movement of mailbags to and from the shore. Pneumatic tubes connected the building to the docks post office, allowing rapid transfer of telegrams. The ER monogram of King Edward VII is displayed near the top of the frontage.

In 1907 Milford Haven post office’s 50 staff handled 403,000 telegrams, making it the second busiest telegraph office in Wales, after Cardiff. The rapid growth in telegrams, partly down to the port’s thriving fish trade, was one of the main reasons for building a larger post office.

The project was overseen by Robert James Portch, the town’s postmaster from 1900 to 1910. He and his wife Florence were staunch Roman Catholics and held fortnightly dances at their house to raise funds for St Francis’ Church in Priory Road. He was later postmaster of Waterford, Ireland, living in Tramore. After dashing to catch his train to work there one morning in 1915, he collapsed and died in a first-class compartment.

One of the boys who delivered telegrams from the new post office to local addresses was Cyril Pratt. He served with the Royal Field Artillery in France in the First World War, gaining a Diploma of Merit for his bravery in laying a telephone wire as enemy shells rained down in June 1916. He received the Military Medal in 1917 for his part in maintaining communications during an infantry advance in July. He was wounded in 1918.