The church at Caerhun stands on the north-eastern corner of a former auxiliary Roman fort, known as Canovium. The churchyard is thought to cover the site of barracks. In the field between the fort site and river are the remains of a Roman bath house.

Canovium was the base for 500 auxiliary soldiers – recruited from non-Roman tribes to fight in front of, or alongside, Roman legions. 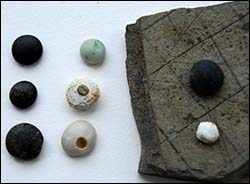 It was strategically located to control the river Conwy, along with pre-Roman tracks and the Roman road from Deva (Chester) to Segontium (Caernarfon). West of Caerhun, the road made extensive use of prehistoric tracks.

One of the road’s purposes was to help the Romans’ protracted struggle with the Celtic tribes on Anglesey. The Romans eventually took control of Anglesey c.77AD.

Initially the fort at Canovium was of earth and timber. In the mid-2nd century it was rebuilt in stone and over a larger area, with 17 buildings and watchtowers at each corner. There were two granaries, for food storage, near the north gate for supply from the river as well as land. The complex included a bath house with a furnace to heat the water. Outside the fort were timber buildings where civilians lived and established small businesses. Some of the soldiers’ families may have lived there. 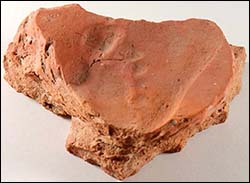 Excavations in the 1920s revealed the size and layout of Canovium. Archaeologists uncovered numerous items such as coins, jewellery, pottery fragments, a cremation urn, a game with counters (above right) and a tile bearing the imprint of a child’s foot (pictured left). Many of the objects are displayed at Llandudno Museum, which kindly provided the photos shown here.