A church at Llandegfan was recorded in 1254, probably where St Tegfan had established a cell in the sixth century. The oldest features of the current building date from the 14th century. Many changes were made in 1901-1903, when the church was rebuilt.

Tegfan was born in Wales to refugee parents. His father was a nobleman in a north British kingdom which had been crushed by neighbouring peoples. His mother was from Brittany. He was associated with South Wales and, primarily, Anglesey.

Outside the door into the 16th-century porch is an ancient font bowl, discovered during the rebuilding. It may date from the 14th century. 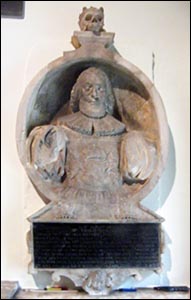 Near the east window is a memorial (pictured right) to Thomas Davis, born in Llandegfan. He became Messenger to King Charles I, having previously served Charles and Charles’ brother Prince Henry. The memorial records that he provided for the poor of Llandegfan in his will.

That will was rediscovered in June 2007, on a parchment dated 16 August 1649, in a safe in the church which had not been opened for at least 100 years. Inside there were four other parchments, dating from 1649 to 1799, relating to the will. The documents are now in the Anglesey archives, Llangefni.

Thomas Davis died, aged 62, in 1649, the same year that Charles I was executed for treason, in the aftermath of the Civil War. The memorial shows Thomas dressed in the King’s Messenger’s uniform, on which traces of red and blue paint can still be seen. The crowned skull at the top of the memorial signifies that he died without a male heir.

In his will he left 52 shillings annually to provide bread for the parish’s poor, and four shillings a year for the churchwardens to distribute the bread after morning service each Sunday.

In 1890 the House of Lords suspended the vicar of Beaumaris for refusing to take services at St Tegfan’s Church while also preventing a curate, specially appointed by the Bishop, from taking services here.

Graves in the churchyard include those of  more than 30 boys from HMS Clio, a naval training ship which was moored on the Menai Strait from 1877 to 1920.

With thanks to Marion Jones and Ken Newis