A big railway depot used to cover the area where you can now watch films at Cineworld or buy fast food.

The first locomotive depot was built in 1858 and had only two tracks. It was replaced in 1880 by a shed with four tracks and space for 12 locos. There was also a platform for loading coal into the steam engines, a water pump and a turntable (a rotating track for turning engines to face the opposite direction).

Men who worked the Llandudno and Betws-y-coed branch lines were transferred from Llandudno to the new depot. The North Wales Express reported that they would “have to reside in this nei 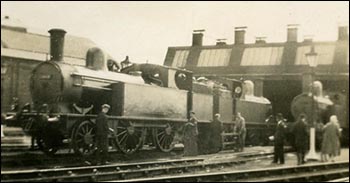 ghbourhood”. The railway company would soon erect c.50 houses and shops near Llandudno Junction station “as there are but few houses in the immediate locality”.

One of the Junction’s star locomotives was called Vimiera. It was so reliable it was chosen to pull the royal train in North Wales, shortly before going to Crewe for overhaul in 1899. By then it had clocked up 70,000 miles in 11 months, mainly on the express between North Wales and Manchester.

As railway traffic continued to grow, in 1899 the London & North Western Railway rebuilt the depot again. The new engine shed was almost 100 metres long, big enough for 24 locos, and a carriage shed was built alongside. The photo on the right, courtesy of Trefor Price, was probably taken in the 1930s.

After the Second World War, the depot became part of government-owned British Railways. Each loco allocated here was fitted with a “shed plate” (a small plaque) displaying the “shed code”, which was initially 7A, later 6G. This informed employees in distant parts of the network that the loco must be returned to Llandudno Junction. The main road outside Cineworld is named Ffordd 6G as a memento of the depot.

In summer, Llandudno Junction was also a servicing point for visiting locos which had brought long trains full of holidaymakers to Llandudno and other resorts. The steam shed closed in October 1966 but the carriage shed was kept for diesel locos and rolling stock. It was demolished in 2000 and the new Cineworld building was designed to echo its outline. The photographer of the picture above was standing roughly opposite the entrance to Cineworld, the camera pointing towards where Pizza Hut now stands.

With thanks to Geoff Poole and Trefor Price