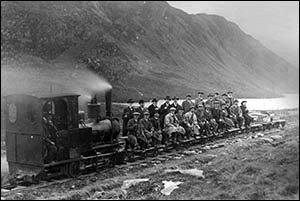 It may seem surprising today, but these sparsely populated uplands were once home to a railway system, latterly carrying materials and workers for construction and maintenance of dams. As you walk the paths in the area – some of which use former railway routes – look out for old bridges over watercourses and embankments or cuttings, built to keep the railway almost level.

Various railways were built for small quarries and mines in the area. An incline carried wagons laden with stone down to Dolgarrog. Large water pipes were eventually laid alongside part of the incline.

The first section of railway was built for the Cedryn and Cwmeigiau slate quarries c.1859. In 1863 the North Wales Chronicle printed a verse by local poet Robert Jones in praise of “Ffordd Haiarn Cedryn” (the Cedryn iron road), in which he predicted the awe that would greet the incline’s opening. Another verse praised the railway’s civil engineer James Spooner, best known today for his Ffestiniog Railway (Blaenau Ffestiniog to Porthmadog).

The Cedryn and Cwm Eigiau quarries were sold in 1881 after three years in rent arrears. The chief assets were tramway inclines and rails worth £140 and six railway wagons valued at £36.

The narrow gauge railway from the top of the incline to Llyn Eigiau was converted to standard gauge c.1907, when the Eigiau and Coedty dams were built to supply water for the new hydro-electric power station and aluminium factory in Dolgarrog. A new section of route (west of Coedty) bypassed a short incline, and new tracks were laid along the foot of Eigiau dam.

The tracks reverted to narrow gauge c.1916, when construction of the Cowlyd Tramway began, along the southern slope of Moel Eilio. The photo above, courtesy of the Conwy Archive Service, shows the train which carried dignitaries to and from the cutting of the first sod for the Cowlyd dam in September 1917.

Steam locomotives to work the railways were hauled up and down the incline. For heavier locos, motive power was provided via three cables. One cable was attached to the winding engine at the top. Another passed around a pulley and back down the slope to a steam locomotive on temporary tracks. The third was connected to a traction engine, which pulled the cable by driving northwards along the main road in Dolgarrog!