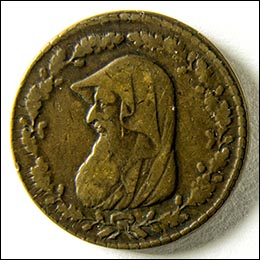 Six copper coins from the 18th century are displayed inside Dylan’s Restaurant. They were issued by the Parys Mines in Amlwch but were valid currency as far away as Liverpool and London.

The pennies and halfpennies displayed here are dated between 1787 and 1793. There was a national shortage of coins in small denominations, so the mining company – which produced large volumes of copper – minted its own currency to pay its workers.

The “heads” side of each coin depicts a hooded figure with a long beard, perhaps a reference to the druids who lived on Anglesey and fought against Roman occupation. The coins were colloquially known as “Anglesey druids”. The “tails” side of the pennies features the initials PMC in a swirling design and the words: “We promise to pay the bearer one penny.” This continues on the rim of the coin: “On demand in London, Liverpool or Anglesey.” 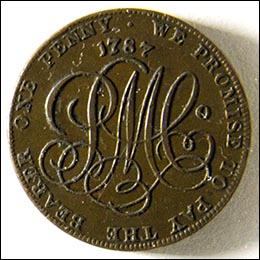 It’s believed that the coins were regularly used by drovers to pay for accommodation, food and ale, along with animal feed. The drovers walked livestock from Anglesey to London, a journey which involved swimming cows across the Menai Strait!

In 1900 a copper coin issued by the “P.M. Co.” and dated 1788 was discovered in Llandudno Junction, during demolition of the Ferry Farm Hotel.

When Dylan's Restaurant opened in 2012, it produced chocolate versions of the Anglesey penny to give out with cups of coffee and tea! After opening a second restaurant, in Criccieth, the business stopped making the druid coins in favour of chocolate coins showing local landmarks, the Menai Suspension Bridge for Dylan’s customers.

With thanks to Jane Evans