The open space here, to the west of the Lôn Las Peris cycling and walking route, is where trains diverged from the main Llanberis line into the sidings of the nearby Glyn Rhonwy slate quarry. The quarry operated from c.1840 to 1930.

Enjoy our charming old building, with new fittings in a beautiful location

In 1869, two carts laden with liquid explosive for the quarry exploded at Cwm-y-glo, killing six, injuring many others and scattering wreckage and body parts across a wide area. It was probably the biggest explosion in history at the time.

During the Second World War, high explosive and incendiary bombs were stored in the old quarry, which was chosen because it was accessible by road and railway. Also, its remoteness meant there was a reduced risk to the public if there had been an explosion. Slate waste was spread over the bomb store to camouflage it from German planes.

It’s estimated that the storage area inside the quarry was equivalent to two football pitches. The bombs were unloaded in the reconfigured railway sidings after being brought by train directly from the munitions factories where they were made. In the old slate sheds on the site, women workers filled ammunition belts with rounds of bullets for machine guns. When an RAF airbase needed ammunition for its planes, an order would be sent through to Glyn Rhonwy and be delivered by road or by rail.

The 1946 aerial photo, courtesy of the Welsh Government, shows the bomb store near the centre, with the railway sidings on the right. Half of the bomb store is without its roof, which had collapsed in 1942 – probably because of the weight of the slate camouflage and snow. Munitions from beneath the collapsed roof were sent to a new storage facility at RAF Rhiwlas, near Bangor. 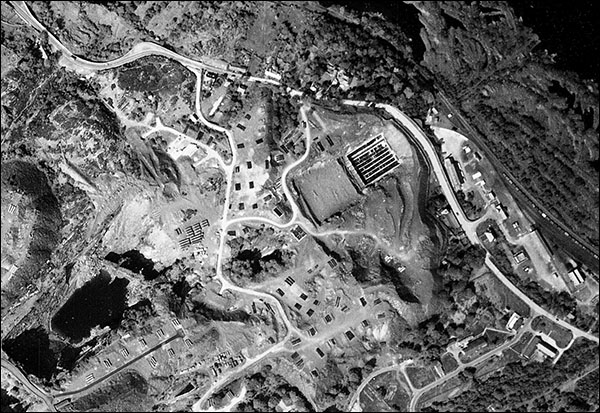 After the war, the tens of thousands of tons of armaments that had not been used were moved to a nearby quarry and detonated, resulting in thick black smoke obscuring the mountains. In the 1950s, a lake formed in the hollow left by the earlier quarrying. The water was removed when specialists began, in 1969, the long process of removing the remaining explosives and triggers.

Scenes for the 1983 horror film The Keep were shot in the former quarry.

With thanks to Adrian Hughes, of the Home Front Museum, Llandudno, Gwyndaf Hughes and the Welsh Government

Footnotes: Recollections of the cleared site

The work to make the site safe turned the summer evening sky in Llanberis red from the explosions, writes Gwyndaf Hughes. The specialists didn’t succeed in clearing the entire site. Boys from Llanberis found all sorts of explosives there, all potentially lethal.

One group found a complete box of flares, still in their greasy wrappers. When fired, the flares set light to the mountain and the fire brigade was called. The boys fled up the mountain and down the other side, but there was a strong smell of smoke on them. They went back to see the fire so that they’d have an excuse to give their parents for the smoke smell!