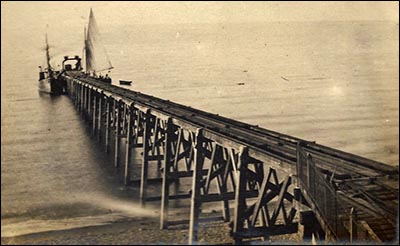 A 1,000-ton German ship named Rethi Muller ran aground near here on 5 November 1967 after visiting the quarry jetty which stretched out into the sea.

The jetty was built in the Victorian era. Stone from the Darbishire family’s quarries behind Penmaenmawr was lowered in railway wagons down an inclined plane to the seaftont. The photo of the jetty on the right was taken by Otto Vernon Darbishire in the 1880s or early 1890s.

The Rethi Muller was the largest vessel ever to visit the jetty. While it waited to be loaded with stone, it was hit by 80kph (50mph) winds.

At 10am the captain, Franz Hintz, reported that the jetty wouldn’t hold the ship and shortly afterwards it broke free and sprung broadside to the sea. The snapping of the last of the lines caused the bo’sun to break a leg. The ship (pictured below left by John Lawson-Reay) dragged anchor towards the lee shore.

An RAF rescue helicopter took away the injured seaman, at the height of the storm. The Llandudno Life Saving Apparatus team was called, led by Eric Williams, to put a rocket line aboard the ship which w 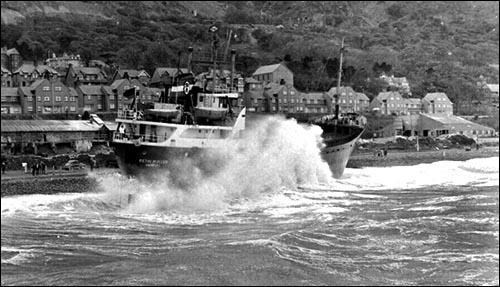 ould enable the crew to be hauled to safety using a “breeches buoy”.

John Lawson-Reay filmed the dramatic scenes for the BBC. He recalls: “A woman was brought ashore on the breeches buoy and we were told that she was the captain’s wife. We never got a clear look at her. She seemed to be very shy. The German crew decided to stay with their ship, which was by now aground on the beach. Much later it transpired that the lady concerned was from Llandudno and had been ‘entertaining’ the crew!”

The ship was refloated and hauled away by tugs after 13 days aground. The ship was lifted by inflated plastic rollers, while bulldozers carved a deep channel between the ship and the sea.

With thanks to John Lawson-Reay and Owen Darbishire