Parts of this church probably date from the 13th century. The site was in religious use before then. The church is one of several in Pembrokeshire dedicated to Elidyr, thought to be the same person as St Teilo (reputedly born in Penally) who lived in the 6th century.

The church and nearby land were granted c.1150 to the Knights Hospitaller, based in Slebech, to the north. Outlaws could claim sanctuary here, on condition that they would then leave the country for good. The Hospitallers helped pilgrims walking from Amroth to St Davids.

In 1638 the vicar of Amroth was forced to leave after he refused to follow the king’s order that the Book of Sports be read from the pulpit every Sunday (the book listed games which could and couldn’t be played on the Sabbath). The vicar also prohibited playing of the authorised games after worship.

The church was restored and extended in the 19th century, but Dyfed Archaeological Trust has estimated that 70% of the church’s fabric dates from before then. The tower is medieval. 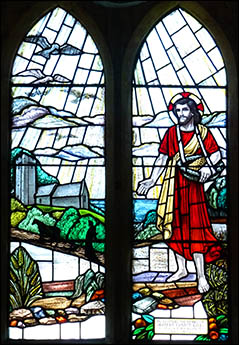 The chapel on the north side was added in the 16th century for the private use of the castle’s occupants. This continued until the chapel was given to the church in the 1880s.

The stained glass windows include one by Roy Coomber in memory of Herbert Ernest Giles, a farmer of Llanteg who died in a vehicle accident in 1992. The window (pictured here) includes local scenes.

Near the church’s porch you can see the stepped base of a medieval preaching cross. The cross was destroyed centuries ago. The stone now standing on the base has old carvings, possibly from the 17th century. Sermons are still preached from the base of the cross during occasional outdoor services.

Some of the churchyard graves have iron headstones, denoting connections to the local iron industry. Businessman David Rees, buried in the churchyard in 1789, left funds to pay for free education for Amroth’s children, initially in a building on church grounds and later in the Victorian school building over the road.

Also buried here is Mary Rees, nee Prout, sentenced to death in 1864 for dropping her six-week-old daughter down a mine shaft. Her sentence was reduced and she died in 1921. See the footnotes for more on her story.

With thanks to Mark Harvey

Mary Prout was born in 1843 and brought up in Summerhill, Amroth. Her mother died in 1861. Her father and his new wife sent Mary to Narberth workhouse when they learned that Mary was pregnant.

When her baby Rhoda was six weeks old, Mary walked from the workhouse to Amroth. On the way there, she threw Rhoda down a mine shaft in Colby and ran away a short distance. She soon returned and noticed she couldn’t hear the baby.

Post-natal depression wasn’t a recognised disorder and Mary was tried for murder. Her father and stepmother didn’t attend the trial. Her grandmother was a witness for the prosecution against what she called “the prisoner” – she wouldn’t use Mary’s name.

Mary had no defence lawyer and wasn’t allowed to make a statement in court. She was sentenced to be hanged, but a petition for clemency was sent to Queen Victoria from 1,120 people, including the High Sheriff of Pembrokeshire, magistrates and barristers. The Home Secretary commuted her sentence to 20 years in jail, which could be reduced to 15 years for good behaviour.

She married in June 1883 and had further children. She died in March 1921, aged 78, at her son's home in London. Her body was taken to Amroth for burial.