Land in this vicinity was occupied by an army camp from the second half of the 19th century. Until 1914, it was used solely by Territorial Army forces for annual summer training camps. From 1895 to 1929, the camp and ranges were served by “Conway Marsh” railway sidings. 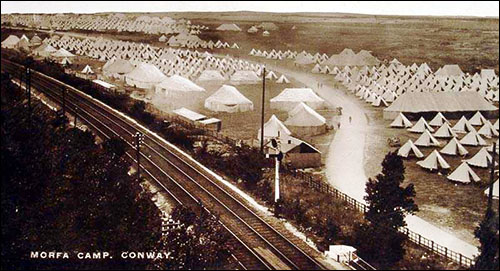 In August 1914, troops of the Durham Light Infantry and Royal Field Artillery were staying at Conway (as Conwy was then known) for their annual two-week summer camp when the First World War broke out. They hastily packed up their equipment, boarded trains and returned to their home depots, ready to be mobilised and sent abroad. Regiments which trained at Conway during that war included the “Salford Pals” of the Lancashire Regiment and the Royal Engineers. A notable visitor during these years was Robert Baden Powell, founder of the Scouting movement.

Troops practised at the camp’s rifle range, carried out exercises on Conwy Mountain and the Great Orme, and had physical training instruction on the beach. The camp had some permanent buildings, such as mess huts and latrines. The soldiers were billeted in bell tents. The YMCA (Young Men’s Christian Association) provided a recreation marquee on the site. 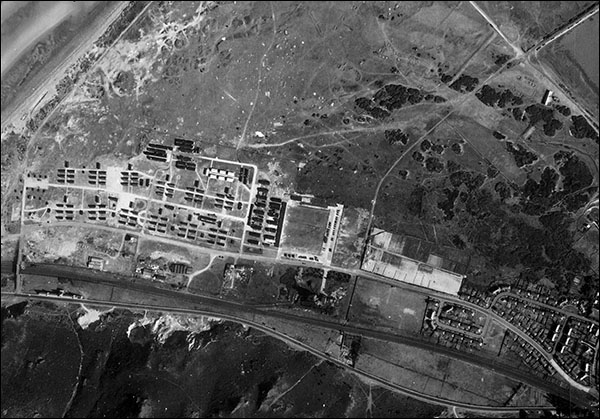 During the Second World War, soldiers of the Royal Netherlands Army were billeted here. Some were Dutch soldiers who had escaped from the Nazi occupation of their homeland, others had moved to Britain before the war and joined the exiled army to help the war effort. They left the camp in 1943 and later took part in the Allies’ liberation of France.

Men were also billeted here while they worked on the secret Mulberry Harbour prototype nearby. The aerial photo, courtesy of the Welsh Government, shows the camp in 1945.

In 1946, the site hosted a Polish Resettlement Camp, for 368 men, women and children who had not returned to Poland from Britain after the war. They included Michael Niedzwiecki, whose son Eddie (born in Bangor in 1959) was a goalkeeper for Wrexham, Chelsea and Wales in the 1980s.

The site was converted into a family holiday park by the Family Holidays Association, whose founder, Thomas Arthur Leonard, was a pacifist and early Labour Party supporter who lived in Conwy. Despite his anti-war views, during the First World War he had invited troops at Conway camp to relax for a while at the holiday centre which he ran for working people in Conwy.

With thanks to Adrian Hughes, of the Home Front museum, Llandudno, and to the Welsh Government for the aerial photo