Here the Wales Coast Path passes between the girders of a footbridge which once spanned two railways and a main road. Locals knew it as the Slip Bridge, because it led to Slip beach.

The bowstring-girder footbridge was built in 1914 near where St Helen’s Road diverges from Oystermouth Road. It rested on stone abutments which had steps from both directions on both sides. The abutments still stand.

The old photo shows the bridge, Oystermouth Road and a Mumbles Railway tram. Beyond the wall was the former London & North Western Railway route from Swansea Victoria station to Pontarddulais and on to Shrewsbury. Notice the railway’s semaphore signals on the right.

In 1807 the Mumbles Railway became the first railway in the world to carry passengers. Initially the carriages were pulled by horses. Later steam locomotives hauled trains of open-top double-deck carriages, as shown in the picture of the St Helen’s Road stop. On the left of the picture is one of the electric tramcars which ran along Swansea’s streets. 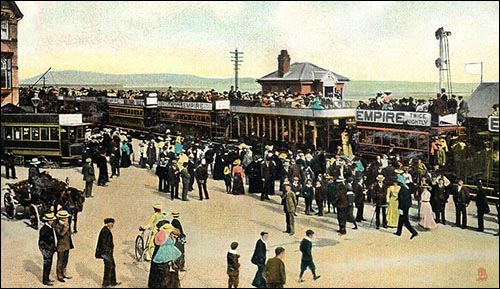 The Mumbles Railway was electrified in 1929, when large tramcars were introduced. It closed in 1960. Swansea Victoria station closed in 1964. Removal of the railway tracks created space for road widening and creation of the popular walking and cycling route along the bay.

The Slip Bridge’s girders were removed in 2004 for repairs which proved to be unaffordable. Instead, they were placed here. Railings were added at each end for safety.

The girders are at the western end of a strip of ground which previously lay between the Mumbles Railway and the LNWR. Within this strip, the LNWR’s Swansea Bay station and sidings were opposite the cricket ground. Further west was the tree-lined Esplanade, where the war memorial was erected in 1923.